Arnie Somogyi's Ambulance is a jazz quintet with a famous special guest, trumpeter Eddie Henderson. Arnie Somogyi has played bass as session musician for the likes of Urban Species, Galliano and Omar as well as playing live with big jazz names including Bobby Hutcherson, Steve Grossman, Art Farmer and Randy Brecker. This debut long player is the result of a musical development residency at Snape Maltings in Suffolk and conveys some of that place's rural, reflective ambience.

Walking Wounded begins beautifully in a pool of sparkling piano and bass, out of which rises plangent saxophone, tailed by trumpet. The rhythm section soons asserts itself with a mellow urgency. Eddie Henderson's solo towards the halfway mark is rich, driven and bursting with confidence. The baton is passed to one of Ambulance's two saxophonists - unfortunately it's impossible to tell whether it's Paul Booth or Rob Townsend as they're both credited on the sleeve with playing tenor and soprano - for a succinct, but powerful solo, the optimistic theme is revisited and the composition is over.

Mick The Fish is a gentle piece of ambience, a mere two minutes or so in length, it features the waves recorded at Aldeburgh on the Suffolk coast, some speech from a local fisherman and twinkling piano. It makes for a lovely piece in itself, but it's also the first of four such improvised interludes that form The Atomic Weapons Research Establishment, Orford Ness Suite.

Tumbledown and Adrift make for delightful, slow-paced, umber-toned experiences that are as sumptuous as the finest chocolate melting in your mouth. Closing track Broadside returns to Aldeburgh's waves, now mixed with some interestingly left-field percussion and piano that gradually moves towards a more straightahead approach. "Accident and Insurgency" isn't a tremendously innovative set, but its willingness to experiment is a pleasure. It's also a delightfully melodic affair peppered with nimble solos and rooted in a generous English outlook that recalls the work of Django Bates, Earthworks and Iain Ballamy. 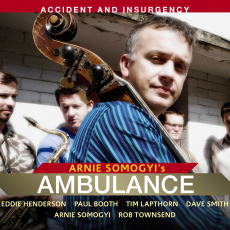 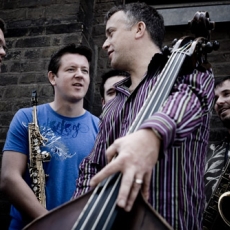