It's almost 30 years since Joshua Rifkin rocked the musical world with his one-to-a-part recording of Bach's last and greatest sacred work. The subsequent controversy between the ‘choral' tradition and the minimalists became highly acrimonious.

Butt takes a more moderate stance than Rifkin's strictly solo performance. With Ten Singers, he varies density and vocal colour by adding and subtracting voices.  The Kyrie fugue begins with spare solo voices, but they're doubled as the instrumental accompaniment becomes richer.  As well as modifying the sound-quality, this clarifies the structure - Italian solo-tutti contrasts underlie much of Bach's music. So too does dance, and Butt's players generate a lively  sense of forward motion: the perpetual ‘walking' bass-line of ‘Et in unum' combines a light step with constant momentum.

Young Consort voices meet the virtuoso challenges, ‘Et resurrexit' for instance, at a thrilling pace . As soloists they are outstanding - Margot Oitzinger a contralto with countertenor-ish focus, Susan Hamilton ideally matched with, yet distinctive from Osmond in the ‘Christe' duet.  Thomas Hobbs' Benedictus is gloriously lyrical ( with flute rather than violin); Matthew Brook's Quoniam is as fluent as the impeccable horn obbligato of Anneke Scott: four violins present an unblemished unison in the ‘Agnus'.

Such transparency comes at a price. It is exemplified by the first Credo: in this eight-part texture, solo voices and instruments are less audibly differentiated than would be full chorus and orchestra. But surround-sound recording helps greatly, drawing out a third dimension from the flat stage of stereo.

No performance could better justify small-scale Bach than this convincing marriage of scholarship and inspiration. 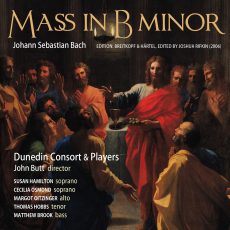