Barb Jungr - Just Like a Woman (hymn to Nina) - Coda

Barb Jungr has variously been labelled jazz, cabaret, pop, an English Edith Piaf, Britain's answer to Juliette Greco and a woman who channels the spirit of Peggy Lee. But really she is simply an exceptional interpreter of a wide range of popular songs. Her current album, comprising of songs previously recorded by Nina Simone, resoundingly proves this point.

Take Angel of the Morning, for example, in which Jungr inhabits the wounded persona of the eponymous angel - desperate for love, not wishing to appear needy and about to be left by her one-night-stand. Here her performance is so compelling that the effect is heartbreaking. This is an extraordinary performance subtly conveying great emotional complexity.

Elsewhere there are stark, bleak versions of the traditional Black is the Colour and One Morning in May, a gorgeous version of the BeeGees' To Love Somebody and a celebratory reading of Bob Dylan's Just Like a Woman, a harrowing one of the same writer's appalling narrative Ballad of Hollis Brown and a spooky Lilac Wine. 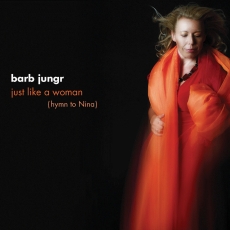