Anyone who has experienced Pamela Thorby's astonishing virtuosity on the recorder over the last decade or so may be surprised that she waited until now to release her first solo album. I first heard her by chance on Radio 3, in an exhilarating performance with the Palladian Ensemble of Nicola Mattheis' Ground After the Scotch Humour. Pamela says "I was brought up in Scotland but my mum is from Yorkshire; playing the recorder was one of my earliest memories. My sister would march round the living room to Black Dyke Mills Band LPs with me at the front playing along by ear." Soon she discovered baroque music: "I was obsessed with recordings that I had of Brandenburgs three and six. They just seemed perfect in every way and I would play them over and over." She only learned to read music in her teens and didn't receive any formal teaching on the recorder until she went to the Guildhall School of Music and Drama. It is perhaps a sympton of the recorder's lingering primary-school reputation that she arrived with the trombone as her main instrument. "It became apparent over my time there that I was naturally gifted at the recorder and not the trombone." Even as a student she was taking on gigs "playing a Vespers here, a Brandenburg there". She is now recorder professor at the Guildhall.

Of the other early music performers that she admires, recorder player Robert Ehrlich in particular has been a big influence. "But I'm not a recorder fanatic and if I had a beautiful voice I would rather be a singer; I love making music with a passion and try hard to express myself on the one thing I can play." When describing the qualitite she aspires to in her playing, Thorby reaches beyond the confines of early music to quote pertinent comments made by a critic about blues artist Kelly Joe Phelps: "He sounds like he's coming from the inside out, the bottom up. He's not just playing at the music, or trying to recreate or imitate something that's already happened in the past." Her love of jazz is reflected in the naturalness of her embellishments. They sound unpremeditated yet stylistically integrated, and add colour and vitality to her performance without obscuring the character of the piece of the sense of melodic line: "Ornamentation, improvising within a structure, is something that I love to do more than anything else."

It's the sheer exuberence of her playing that makes the new CD Baroque Recorder Concertos such a delight. She brings the word 'baroque' associations that it has in art and architecture of florid decoration, rather than the implications of formality and restrained expression sometimes, quite wrongly, found in its musical usage. The CD includdes three Vivaldi concertos as well as the familiar Telemann A minor suite and a Sammartini concerto. The Vivaldi concertos have long been claimed by both flautists and recorder players, and the arguments over instrumentation and pitch are investigated thoroughly in the excellent booklet notes by David Lasocki; indications in the original manuscript suggest that the C major concerto (RV 443) should be played down a 4th in G (doing so utilises the lower notes of the strings for a start). Thorby has in fact been playing it in G for some years beofer the musicological evidence came to light; the result is thoroughly convincing.

I went to hear Pamela Thorby and Sonnerie playing some of the works on the CD at the Wigmore Hall recently and found no differences in quality or style between her live and recorded performances. Her technique takes the breath away in concert just as is does on disc. Likewise the CD, aided by Linn's clear, un-tweaked sound, captures all the energy she projects in the concert hall. Each movement sounds as if it was done in a single take. Tempi are often fast judged by other performances, yet never too fast to hear the detail of the music; they support the argument that works such as the Telemann and the Sammartini were meant for professionals, not amateurs. There may be plenty of recordings of the Telemann suite around, but don't let that put you off buying this one. It provides a fresh experience of baroque classic. "I chose the pieces that I had played most in concert and thought the most about. there was no point in making the disc unless I had something of my own to say and I wanted to be clear in my own mind so that Monica Huggett and Sonnerie knew what I was trying to acheive. You don't go playing a concerto record with that group unless you know what you want. It's a brilliant group and all the members have their own well formed opinions." Thorby adds: "Concertos are fun, but my favourite thing is to play chamber music." As a result, she hopes that future CDs might include the Handel recorder sonatas. "they are pieces I have always loved: little pocket-book snippets of oratorio, opera and concerto all contained in such consise form." And she would like to record using actual 18th-century recorders. 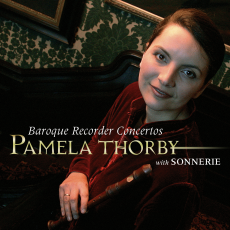