We are accustomed to hearing this work performed live and in recordings with monumental forces. Indeed, it was performed thus in its public première on March 19, 1799, in Vienna, where it has been performed every year since. It was published in 1800 with libretto texts in both the original German and in English, in which it is most often performed, as Haydn preferred, in English-speaking countries, where it soon became as popular as it was in Vienna. Haydn had visited England twice and was well known and liked there, but the English public's love of Handel (whose works Haydn had heard during his visits and with which he was therefore familiar when he composed this work in 1796-98, the longest time he ever spent on a single work) eventually left it in the dust in those lands. It has been performed there more frequently in more recent times.

Some of the aspects of the work were revolutionary in its day: it was the first to introduce the contrabassoon to Vienna, its use of the trombones was also different from that in earlier works, its opening chord that evokes the chaos of the universe before the hand of God intervened was the most modern music Viennese audiences had ever heard, and the music evoking the coming of light built so brilliantly as to elicit spontaneous applause. None of these are revolutionary today or 'modern' to our ears or a surprise to them, and we are blithely unaware of their effect on their original listeners. Haydn wrote other works in which he effectively suggested natural events: the earthquake that concludes his Die sieben letzten Worte unseres Erlösers am Kreuze (The Seven Last Words of Christ on the Cross) for orchestra in 1785, for example. I recall my own ear-opening experience upon hearing this latter work live for the first time in his 1787 string-quartet version and marveling at the ingenuity; he transformed it into an oratorio in 1796, just before writing Die Schöpfung.

The original libretto for Die Schöpfung was written by Baron Gottfried van Swieten, who crafted it from an original poem by an unknown author that was given to Haydn by his impresario Johann Peter Salomon (1745-1815) when he left England in 1795. The sources for it are the book of Genesis in the Bible, the equivalent episode in John Milton's Paradise Lost, and the Psalms of David in the Bible. The music was composed to fit the German words, and Pearlman has therefore chosen this language for the recording. The author of the English translation of the libretto is also unknown, and may have been van Swieten; it is awkward in many places. Salomon also suggested that Haydn imitate the Handel oratorio tradition in creating his work; indeed, both Messiah and Die Schöpfung are in three parts, with their second ending with an 'Alleluia' and their third with an 'Amen'. Die Schöpfung's three parts depict the creations of the earth and the flora, those of the animals and man, and the awakening of Adam and Eve. (Might Salomon's suggestion have also prompted Haydn's transformation of Die sieben letzten Worte...?)

The size of the forces employed has from the very beginning varied enormously. The première, on April 30, 1788, was a private performance in a palace, so it was probably more like a chamber-music sized event, although the public got wind of it, for there had been a public full rehearsal on April 29 that had been mobbed, requiring police protection.

The first public performance on March 19, 1799, was large-scale, with about 120 instrumentalists and 60 singers. Before Haydn died in 1808, it had been heard elsewhere in Austria and Germany, in England, Switzerland, Italy, Russia, Spain, Sweden, and even the US. Boston's Handel and Haydn Society, founded in 1815, shows the equal footing the two composers once enjoyed in the English-speaking world's esteem.

Pearlman, who is Professor of Music in Historical Performance at the Boston University School of Music, a harpsichordist, and a compose as well as a conductor, chose to use the numbers of personnel in the original score (lost since 1803, but some performance parts still exist allowing them to be determined with reasonable accuracy): 40 instrumentalists including tympani and a fortepiano with 21 string, 10 wind, and 7 brass instruments, and 25 singers (5 per part with an additional soprano). He takes the tempi at a generally brisk and upbeat pace, bringing the total time in at about nine minutes under what is said to be the usual 1-3/4 hours, but nothing suffers in any way, and this renders the whole lively and enormously effective.

The booklet contains the product title page with ensemble and soloists and recording credits on the inside of the front cover, the track listings with timings on the facing page 3 (also on the back of the tri-fold paperboard case), a fine essay by Pearlman on pages 4-8, the original libretto from the 1800 edition (German and English side-by-side) on pages 9-20, a history of Boston Baroque, founded by Pearlman 40 years ago, the first early music ensemble in North America, on pages 21-23, its personnel: orchestra on page 24, vocal on page 25, a bio of Pearlman on pages 26-27, bios of the soloists on pages 28-30, and acknowledgements of funding support on page 31, with label info on the back cover. Everything is in white text except for the title in yellow and ensemble name and soloists names above their bios in blue, superimposed on portions (no two alike) of the striking photograph by Vulkanette of Stromboli volcano at full moon with eruption that spreads across the two covers, or on black background; the label info unfortunately violates this scheme by placing text in black in a superimposed tan box. There are photos of the ensemble in the recording venue and in its usual performance venue: Jordan Hall of the New England Conservatory in Boston, Mass. (also the home of the Handel and Haydn Society, although it also occasionally performs in Boston's Symphony Hall; this photo is also on the third exterior side of the case), and of its director and the soloists scattered throughout. The whole (other than the label info) is a most attractive presentation.

This recording is the best one I have ever heard. Because of its extraordinary recorded sound - it was recorded in Mechanics Hall in Worcester, Mass, a hall whose fine acoustic I have personally experienced, it offers an historically-informed rendering that has the power with which we are more familiar from modern large-scale live renderings, but it allows details and nuances to be perceived within that power. Linn is an audiophile label, named 'Label of the Year' by Gramophone magazine in 2010. The diction is impeccable and easily understood. If you already have a recording of this work in your collection, you should add this one; if you don't, you should, and it should be this one! Once you have heard it, you will understand my enthusiasm. 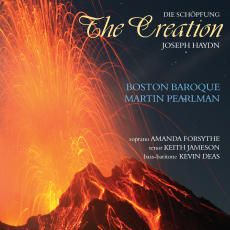