It seems violin virtuoso Joseph Swensen has taken up the conductor's baton as well, a phenomenon no less notable in Itzhak Perlman, Joseph Silverstein, and Pinchas Zukerman. The Linn label offers a number of discs, from Mendelssohn to Mozart to Sibelius, each featuring Swensen leading the Scottish Chamber Orchestra, a post he has held since 1996. The Linn label prides itself on audio fidelity, and this disc is recorded with great clarity and good balance in both the stereo and multichannel options.

Playing a 1715 Stradivarius lent him by a patron of the Scottish Chamber Orchestra, Swensen makes lovely sounds in the familiar Brahms Concerto, cadenza by Joachim. As for the conducting, it is somewhat episodic in phraseology, as though the Brahms could be approached periodically, in the manner of Bruckner. That Swensen likes to linger over a melting phrase or sequence, along with oboe, flute, horn, or string accompaniment, makes for pretty intertwinings. Nice oboe by Robin Williams in the Adagio. When I saw that the disc is filled out with Hungarian Dances, I thought the arrangements would be for violin and orchestra, a kind of homage a Remenyi. No, they are straight orchestral renderings, with the four-hand piano transcriptions by Schmeling, Gal, and Dvorak, et al., including the three which Brahms orchestrated himself. Didn't I first hear some of these with Schmidt-Isserstedt on an old Richmond LP? They are still colorful, semi-gypsy fun. 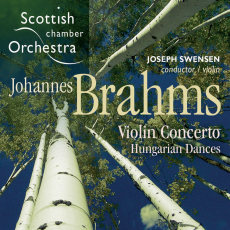