Claire Martin - Take My Heart - All About Jazz

Sensational young London-born jazz/folk singer Martin has built an enviable international reputation with her five Linn albums to date. Every date or session has revealed her catholic taste in songwriters, unwillingness to be categorised, and an exceptional ability to breathe personality into both unexpected and familiar tunes - all underpinned by the wit and technique to keep lyric, melody and swing in easy harness.

Whether her growing following will take easily to her latest depends on one simple test: are we far enough down rock's river to let jazz embrace these songs by writers like Nick Drake, David Sylvian, Elvis Costello, Barry Reynolds and Lennon/McCartney.

Then again, every one of the originals was full of doors being opened by mould-breaking singers itself. And why shouldn't a thirty-something singer steeped in British pop and rock history pick the eye-teeth out of that canon, rather than that of the thirties or fifties legends. Which is probably part of why ace magpie Noel Gallagher worked on Martin's version of 'Help!', while her producer and guitarist, Paul Stacey, is helping to incubate the next batch of Oasis tunes.

There are real reminders of the KD Lang approach to making records on Take My Heart. A kind of absolute focus on the performances, and a burnished, succinct, economically arranged classicism that never shouts 'look at me!' - especially in the tricky bits - or parades in front of the mirror. Meanwhile, Martin's leisurely, smoky voice never dodges a syllable or blurs a meaning as it sends slow, lingering chills up the back of the neck.

I've never really been confident that I knew what plangent means, but I'm pretty sure that this it. 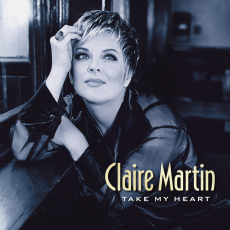