Jazz doesn't usually conjure up an image of cellos in churches. But tonight, this is exactly what was on offer at the Church of St. John the Evangelist, a hot venue for cool stuff in Oxford.

The compositions were written especially for Martin by the likes of the late Sir Richard Rodney Bennett, Mark Anthony Turnage and Django Bates. The collaboration is a great vehicle for songs like Kurt Weill'sMy Ship, Joe Stilgoe's Lost for Words, and Too Much in Love to Care(originally sung by Carmen McRae). There was a bit of Cole Porter, and also Martin's personal homage to George Clooney via Gershwin'sMy Man's Gone Now (although Carly Simon's You're So Vain, which she sung later, curiously comes to mind...). Sinatra, ahead of his centenary, made a show, as did some Irish and Latin American music.

So what should you expect if you come to see this? Well, gritty-smoky-impro this is not. In fact, you figure it's not all about the jazz when Kate Bush and David Bowie make an appearance. Some of it seems distinctly for the middle class masses, like the musically delightful but lyrically frothy Edge Ways, which is about a bloke who seems so narked off by his newly-successful friend ignoring him that he decides to write a song about it. I, too, am 'pretending that I care'. I actually enjoyed the variety, because it played to the skills of the performers. All the musicians were extremely talented, but I thought that, tonight, the girls (two cellists and the ever-melodious Martin) were on particularly top form.

The venue was just great. I couldn't help but smile listening to Makin' Whoopee with various ecclesiastical icons of celibacy staring down at us from the rafters. (But it ends advocating the sanctity of marriage, so all's right with the world.) Tonight's was a programme I wasn't expecting; nonetheless, I melted into its warm, soothing embrace, and I'll be dancing in the dark for a few hours yet. 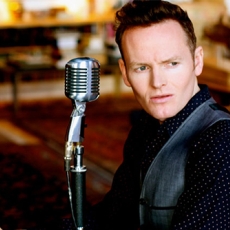 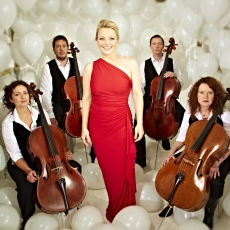