There's more than one way to embrace Rifkin's theory. John Butt has been one of its most important scholarly supporters, and has also offered a new interpretation of what one-per-part scoring might have meant to Bach. Part of this interpretation is theological, and I won't go into it here, but it also addresses performance style. Butt argues that we often think of this scoring "the wrong way around." With modern choral singing as our template, we expect the singers to blend into a unified sound, and we thus hear one-per-part groups as minimized choirs. Yet Butt suggests that Bach (who lived before community choirs) instead expected each choral singer to sound like an individual, with a style "perhaps closer to operatic, multi-solo practice than to a modern, blended ‘choir'." Butt's approach is especially evident in this new set, since the Christmas Oratorio is not a single work that Bach performed in one day, but rather six cantatas for different church days. Some use trumpets and drums, others are more intimate, and in the former and the latter cantatas Butt uses different singers and groupings. How you feel about each singer will determine how you respond to the various cantatas, and critics have been divided. (I very much enjoy all of them, but that's just me.) As in other Dunedin recordings, the conducting and playing are unerringly apposite and convey a sense of "liveness," a sense of joy in making music. And once again, Linn's engineering puts us there: the opening timpani bursts out of your speakers, and the distinguished organist Andrew Benson-Wilson points out that "such is the immediacy of the Linn recording that some of the mechanics of the woodwind instruments (probably the bassoon) can be occasionally heard as a tiny background clatter. Like action noise from an historic organ, this doesn't unduly concern me." Or me. If you've read my previous year's lists, though I admit that most listeners prefer choral performances. (By the way, Rifkin was the first to explain why we can never know what Bach would have preferred if he'd had the choice; I am glad, personally, to have so many artists engaging with the music so intently from so many perspectives.) 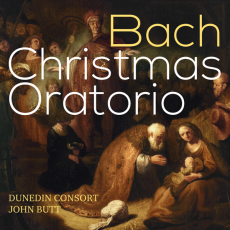