Rarely, very rarely, a recording comes along that because of its content and level of performance seems to be hors concours. This is just such a recording. ‘Content' here takes on special relevance, since beyond the bald heading above what we have is a reconstruction of Bach's first Leipzig Christmas Vespers as given in the Nicolaikirche on 25 December 1723. Thus in addition to Christen, ätzet diesen Tag, BWV 63, composed in Weimar in 1714, and the E-flat version of the Magnificat, with its inserted Christmas Laudes, there is also a Giovanni Gabrieli motet, congregational hymns (sung with spine-tingling fervour) and appropriate organ preludes. Because of the length of the CD (78 minutes), it is necessary to download several items to complete the service.

While the reconstruction is obviously of considerable interest in its own right - it follows a similar format to that adopted by John Butt for his 2012 recording of the St John Passion - it would be to little avail were the performances of a high standard. As in his other Bach recordings, Butt favours one-per-part choruses, though in this sumptuously scored music (4 trumpets and 3 oboes in the cantata), he employs ripieno support throughout, something Bach is unlikely to have done. Both singing and orchestral playing (special kudos for Alex Bellamy's oboe solos) are outstanding throughout. All the singing is especially remarkable for the strong rhetoric and dramatic intensity it conveys, giving, for example, Bach's wonderfully contrasted movements in the Magnificat even greater point. What we are given is nothing less than an enthralling glimpse of Bach's Lutheran church at its most resplendent. 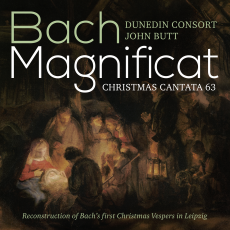