Released in 2017 to mark the 450th anniversary of Monteverdi's birth, the Dunedin Consort's Vespers recording resists the temptation to surround its constituent parts with plainsong to focus directly on the work as it was published. As John Butt explains in his excellent booklet, Monteverdi probably conceived the 1610 compilation as 'an idealised, "imaginary" Vespers service'. Although Butt follows the order of the original printed text he subjects its contents to scholarly scrutiny and arrives at a performance that's historically informed and deeply immersed in words and their meaning.

This is one of those rare recordings, impressive at first blush, that reveals more with every hearing. There's an equally rare combination of innocence and experience about Butt's ten-strong vocal team: compare the treble-like purity of sopranos Joanne Lunn and Esther Brazil in the 'Sonata sopra Sancta Maria' with the sensuous, exquisitely tender singing in the duet 'Pulchra es'. Subtle changes to the vocal scoring moving from one voice per part to the whole ensemble and back again, bring out usually buried details of Monteverdi's counterpoint. Although the full set of singers is deployed in 'Nisi Dominus' and 'Lauda Jerusalem', they project light and shade into the composer's homophonic treatment of their psalm texts, thereby striking a careful balance between the grandeur suggested by the words and the intimacy of ritual worship in a sacred space. Perhaps the atmosphere of Edinburgh's Greyfriars Kirk worked wonders during the sessions; certainly, the building's warm acoustics complement the music-making's contemplative nature.

Some things will surprise, even irritate those raised on earlier recordings of the Vespers, Butt's decision to treat the shift from duple- to triple-time sections as proportions of 3/2 among them. Although certain passages are consequently taken more slowly than usual, his flexible approach to tempo relationships allows greater room for expressive details and, in the case of the 'Sonata sopra Sancta Maria', for the plainsong cantus firmus to unfold at a uniform speed.

For all the attention lavished by John Butt and his musicians on the score - from the high chosen pitch and meantone temperament to the sampled sounds of an early 18th-century Venetian organ - this Vespers transcends historically informed performance practice to touch the spiritual core of Monteverdi's masterwork. 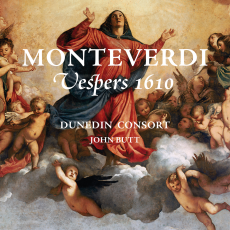