Dunedin Consort is based in Edinburgh, specializing in Baroque, sacred vocal music. This is the ninth recording by Linn Records, and with the exception of the first, which had works by Aaron Copland and Samuel Barber, it has contained the music of George Frideric Handel and the Bach family. But now they move slightly forward in time to Mozart. Or more specifically to Mozart's final year. And his death.

Mozart's Requiem has been recorded in a number of different issues, and also Linn Records has released this work before. In 2003, the Scottish Chamber Orchestra under the direction of the late Sir Charles Mackerras recorded a version by Robert Levin. This was one of many attempts to show improvements of the completions Mozart's student Sussmayr performed after Mozart's death. This enhancement was one of many who came during the last decades of the previous century. We reviewed this record back in 2003.

There have been many views on the quality of Sussmayr`s completion of Mozart's Requiem. It is rightly pointed out that Sussmayr hardly belong to the aces of music history. On the other hand, he is the only one of those who have completed Mozart's Requiem that has known Mozart, and walking in the same musical atmosphere that he - he almost felt the pulse in a musical sense.

Dunendin Consort has taken hold of this, and had ambitions to make a recording that as far as possible is a reconstruction of the first performances. And already here we build a diverse topic. It may be considered as the official first recording, the one that was the basis of the order of Mozart's Requiem - a memorial Mass for the deceased wife of Count Franz von Walsegg. This was the performance in a church in Wiener Neustadt on 14 December 1793 - two years after Mozart's death. But the Requiem was performed already almost a year earlier in a benefit concert for Mozart's widow, Constanze, in early January 1793.

David Black has just completed a thorough job of reconstructing Sussmayr`s original completion of the Requiem, where it also is fairly well documented where Mozart left off, and where Sussmayr took over. Dunedin Consort mention this work as a critical source for their own work on reconstruction, although it does not appear clear whether there is a direct cause of the project. It is nevertheless very obvious that Dunedin Consort has placed a lot of resources in setting up a likely equal orchestral composition, compared to those who were durng the two known performances in 1793.

But then, it was probably not in 1793 the premiere of this gigantic work was helt. Many sources clam that the work was performed at a memorial for Mozart himself, at December 10, 1791 - five days after his death. And Dunedin Consort has also recorded a reconstruction of this performance. Here they have far less information to rely on, so it is far more vague assumptions that underlie than for the performances in 1993. They find it likely that the first two parts were performed, ie Requiem aeternam and Kyrie. They also reasoned their way to a herd where many instruments and voice parts are halved compared to 1993-the performance.

It's all part of a world-class performance of Dunedin Consort. Thisis also a performance with clear characteristics, both in relation to prevailing interpretations in general, and in relation to SCO / Mackerras's recording. I find it reasonable to assume that the Dunedin Consort's performance also reflects the fact that they are an orchestra that focuses on Baroque music. Anyway, I find this interpretation in many ways to be closer to baroque in expression than many other recordings I've listened to. Do we dare to distinguish this period by two diametrically angles - in cartoons "late Baroque" and "early romance"? If so, this is definitely late Baroque ...

I find that many of the parts are performed slightly faster than usual, and with a slightly lighter character. I am not able to decide whether this is a more timely and less romantic interpretation than mainstream interpretations, but would not rule it out. I usually have a preference that the opening portion Requiem aeternam should be played somewhat slower, but on a type of recording like this, it becomes irrelevant. Tuba miram in slot 4 is the part that fascinates me most of the main show from 1793. Here we find accentuation that makes it a great and different music experience from what you normally get. AlsoRecordare has a special, wonderful rhythmic accentuation.

For me the most fascinating part is the last two tracks, which then is the supposed reconstruction of the peformance at Mozart's own memorial at 10. of December 1791. In addition to that there is a lineup that I think suits this work, I feel that it almost provides an atmosphere of being present in Mozart's funeral. Devoutly, and slightly spooky.

Dunedin Consort`s release on Linn Records is a multi-channel SACD, recorded in Greyfriar's Kirk in Edinburgh. Linn Records have a very big range in their approaches to multi-channel mix, from the radical to the rather conservative. On this recording we lean towads the more conservative, and so did the SCO-recording of Requiem. That means a recording where the surround channels are used for ambience. It is an approach that fits the musical material.

The recording is as usual of high quality, and with good dynamics. The sound is in my opinion not quite among the very best from Linn Records, it lacks some of the ability to retain full control over all vocals and instruments in the densest passages.

Although ithere are crowds of recordings with Mozart's Requiem out there, this is a version you can not miss. It is the thorough preliminary studies in combination with the high quality of Dunendi Consort that make this something special. And most importantly for me is the tentative reconstructions from 10 December 1791. It makes this record one of the most important releases of Mozart's Requiem. 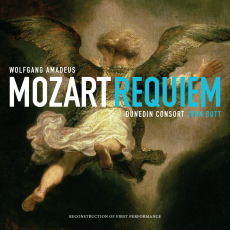