Along with the sonatas and partitas of Bach, Eugène Ysaÿe's sonatas are at the pinnacle of the repertoire at the disposal of the violinist playing alone. Though their composition is separated by two centuries, there is a close relationship between these two sets, not least because hearing Joseph Szigeti perform Bach was the initial inspiration for Ysaÿe. If Bach's work was the foundation-stone, the edifice that Ysaÿe constructed owes a great deal to the string techniques and the musical language available to him in 1923. As he said: "At the present day the tools of violin mastery, of expression, technique, mechanism, are far more necessary than in days gone by. In fact they are indispensable, if the spirit is to express itself without restraint."

The Dutch violinist Frederieke Saeijs is perhaps less known outside The Netherlands than some big names of the violin. She achieved international recognition by winning the 2005 Long-Thibaud International Violin Competition in Paris and recently gave a warmly received account of Oliver Knussen's concerto at the Barbican.

Only one instrument may be involved but these are big, indeed monumental and varied works and allow for many possibilities in their interpretation. Saeijs herself says: "Anyone who wants to say something with the music will have his or her own very interesting interpretation of the piece! Like that, there will (can) never be too many recordings of a piece." The field is not yet crowded, though a recent flurry of activity has seen fine accounts by Alina Ibragimova and Kristóf Baráti added to the catalogue. Older notable performances are those by Oscar Shumsky, Thomas Zehetmair and Leonidas Kavakos. This is illustrious company indeed but Saeijs is not out of place in it.

There is an immediately obvious clue as to what differentiates Saeijs's recital from the rest. Taking Ibragimova and Baráti as benchmarks of modern performance, I looked at track timings. I found that each movement of Saeijs's performance is longer than theirs, without exception, and several by a large margin. I don't imply they are better or worse for that, but they are certainly different. The more measured - by which I don't mean leisurely, for the playing is anything but that - approach appears to allow for greater dramatic contrast and emphasis, and a clearer delineation of the narrative (only one of the works is explicitly titled ‘Ballade' but they all have a feeling of story-telling about them). In other words, these big works get big performances from Frederieke Saeijs.

It's worth taking a look at one of the sonatas in detail to see how this works. Ysaÿe's second sonata, dedicated to the French violinist Jacques Thibaud, has four contrasted movements, beginning with ‘Obsession'. In this, he quotes from the Preludio from Bach's Partita in E major BWV 1006, supposedly because it formed an ‘obsessive' part of Thibaud's daily practice routine. Ysaÿe also weaves in the thirteenth century Latin hymn Dies Irae, a melody which of course has been used by many other composers in all sorts of contexts.

Why Ysaÿe exploited the Dies Irae is not clear - the notion that he foretold his friend's death in a plane crash thirty years later is far-fetched to say the least - but the result is very striking. In fact, he left no explicit clue for its inclusion but it recurs (obsessively?) throughout the sonata. Saeijs brings out the inherent drama by giving more weight to the notes, by digging deeper, both physically and emotionally. In contrast, Kristóf Baráti's more light-weight approach, like that of many others, simply makes less of the music, though his throwaway statement of the Bach at the outset is admirably insouciant.

In the second movement ‘Malinconia', Saeijs's tempo is arguably too slow for the poco lento marking, though as with the rest of the set, my patience wasn't tested. Her thin, colourless tone at the start of this sad song shows a strong understanding of the music's depressive character.

The Dance des Ombres opens with a pizzicato figure where Saeijs treats her instrument almost like a lute, plucking the strings with some force. Ibragimova and Baráti are frankly more anaemic here and more perfunctory in the legato melody of the Sarabande that follows, whereas Saeijs, entering with no vibrato, takes her time to good effect. She treats the reprise more warmly, underlining the musical narrative.

In the final movement, Saeijs derives her undoubted furioso effect by the use of emphatic contrasts rather than by sheer pace and gives due weight to the Dies Irae when it reappears at the end.

It's a similar story in the rest of the music on the disc...I have no problem with Saeijs's more dramatic approach which is enhanced by a typically top-notch recording from Linn.

On the evidence of this recording, Frederieke Saeijs deserves much greater recognition and I hope we hear a lot more of her in the future. She says she loves Bach best so how about that next? For the moment, we have this admirable set to be going on with. 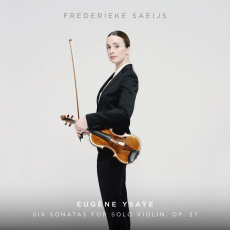 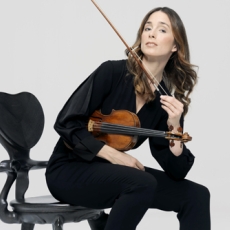