Harp and recorder is an irresistible combination, even more so when the musicians involved are two of the best in their field. Pamela Thorby, formerly of the Palladian Ensemble, has played with many of the finest ensembles and orchestras; she also dabbles in jazz and is a master improviser as well as enjoying a close association with the composer Karl Jenkins. Andrew Lawrence-King, director of The Harp Consort and himself a gifted improviser, runs the gamut of performance modes from solo recitals to directing Baroque opera and oratorio.

"Garden of Early Delights" finds Thorby and Lawrence-King traversing the rich and varied landscape that lies between transcriptions of, or variations on, popular Renaissance and Baroque songs and the more developed instrumental sonata. Chronologically the composers range from Diego Ortiz (c1510-1570) to Biagio Marini (1594-1663); the stylistic range is correspondingly broad. This variety affords the possibility of different approaches to phrasing, articulation and improvised ornamentation, depending on the origin of the base material (song or instrumental form) and the degree of composed elements (melody and figured bass, tablature, et al). There is also much opportunity for solo performance.

Of the latter, Van Eyck's minor-key Derde, Doen Daphne d'over has Thorby, on soprano recorder, tantalisingly adumbrating harmonies with a hypnotic lightness and agility. By contrast, Lawrence-King's gorgeous takes on Dowland's Sorrow, sorrow stay (Second Booke of Songes, 1600) and Weep you no more (Third Booke of Songes, 1603) are both dark and delicate, fully attuned to a vocal style of delivery and yet delighting in the expansive resonance of the baroque triple harp.

The ensemble playing is no less impressive. The quarter-comma meantone temperament gives Thorby's tuning a "fruity" quality (as she puts it in the booklet note); this is especially noticeable in Bassano's Susanne ung jour and Van Eyck's version of Caccini's Amarilli mia bella. Thorby's execution of the glosas and passaggi liberally strewn throughout the recital are no less expressive - this is apparent from the outset, in the opening Recercada segunda de tenore by Diego Ortiz (Lawrence-King here plays a Spanish double harp). Throughout, Lawrence-King's accompaniments are so much more than merely that - they are fully implicated in every affect the 'vocal' line aspires to.

Superbly recorded and with extensive annotation by Lawrence-King, this SACD release is sure to satisfy the legion of baroque-harp fans as much as lovers of the recorder. 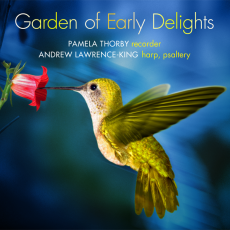