It takes a few hearings to appreciate John Butt's one-voice-per-part recording of the Matthew Passion. A listener anticipating a wall of voices in Kommt, ihr Töchter may be disappointed. What Butt does give us is a more translucent wall, full of chinks and crannies. Kommt, ihr Töchter presents eight different voices that do not always match vowels or timbre. Perhaps Butt is attempting to create a world in which the individuals present at the Passion speak-not in the overarching crash of a mob but through single voices that emerge from it. With this approach, some of the choruses, such as Herr, bin ichs? and the chorales, work magically. Other choruses, such as Kommt, ihr Töchter, Sind Blitze, sind Donner, and Wir setzen uns mit Tränen nieder, lose dramatic weight.

This recording employs Bach's instrumentation in the 1742 version-significantly, the last performance of the Passion during Bach's lifetime. The major change is the substitution of harpsichord for organ in the second orchestra. (Unfortunately, it's all but impossible to hear the harpsichord in this recording.) A viola da gamba is added to orchestra two for Mein Jesus schweigt / Geduld.

As a whole, the soloists sing with beauty and a genuine understanding of the drama. Both Nicholas Mulroy as the Evangelist and Matthew Brook as Jesus offer especially sensitive performances. The orchestra plays with a great range of color and a gentle touch. As always with Linn, the recording itself is immaculate. 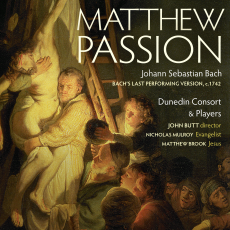