This is a crucial release for the Palladian Ensemble. Up to this point (in recordings, at least) their violinist has been the talented and charming Rachel Podger, whose burgeoning solo career has, sadly, necessitated cuts to her chamber music commitments. This new issue - the Palladian's ninth for Linn - is the first outing for new boy, Rodolfo Richter, who joined the team in 2002. Richter has garnered a sheaf of international awards for his solo and ensemble work, and is undoubtedly a worthy successor. But in the delicately balanced world of baroque chamber music no-one is ever an exact replacement.

Richter plays a glorious Andrea Guarneri made in Cremona in 1674, which is a more sinuous and insinuating instrument than Podger's limelight-stealing Pesarinius (Genoa, 1739). It subtly alters the natural musical alliances within the group, with the violin now the more natural ally of the bass viol than the recorder. I note too, a greater sense of rhythmic incisiveness, with treble and bass strings adding more bite to rhythmically propulsive passages than in some of their earlier recordings. These subtle changes are perfectly timed to help maximize the impact of central work here, Jean-Féry Rebel's choreographed ‘symphony' Les Elémens (1737). It opens with one of the most startling effects in all Baroque music - a depiction of chaos in which the instruments sound every note of the D minor harmonic scale simultaneously, eventually resolving to the single note representing Earth. We are used to hearing this suite played by orchestral forces, but actually Rebel published the work in short score, with one or two treble lines, a figured bass and occasional indications of his original, fuller instrumentation. It necessitates some degree of adaptation by whoever wants to play it, but falls conveniently within the resources of the Palladian Ensemble, in whose arrangement ‘Le Cahos' still retains all its power to shock. All four elements are represented in the dances that follow - Water and Earth in the first Loure, Air in the Ramage, and Fire in the Chaconne - all characterized by a wider variety of tone colours than such a small group should by rights be able to produce.

The rest of the programme consists of two suites and a set of Folies d'Espagne variations by Marin Marais, freely assembled and adapted (as suggested by the composer) by the group's gamba player Susanne Heinrich. The Palladian Ensemble avoid the affected charm and simpering delicacy which sometimes passes for French style; here the music making is gratifyingly direct - gripping, animated, and sometimes positively visceral. Recommended. 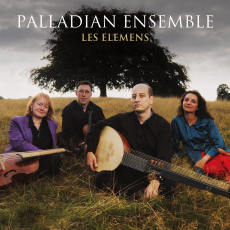