This pair of discs celebrates the silver jubilee of Magnificat, one of many outstanding early music choirs who have made the world a better place with their recordings and performances of familiar and, particularly, unfamiliar repertory. These are based on research and editions by reliable scholars such as their conductor Philip Cave and regular soprano/mean Sally Dunkley. To celebrate their notable anniversary they have chosen music on a Savonarolan theme composed by eight great composers from the period that began with Josquin and culminated with Byrd. So distinguished is every track on this pair of discs, and so distinguished are the performances of every track, that each item is a good reason by itself for purchasing the album. Adventurous and discerning scholars and performers have now begun to reveal that the hitherto Lost Generation of mainly Franco-Flemish composers possesses greatness to put beside their bookends Josquin and Palestrina. The repertory on this double album - which contains some premiere recordings - amply illustrates the consistent and relentless musical talent of this era.

The disc begins with Miserere mei, Deus, at over 17 minutes a work of sustained inspiration, by Josquin. It is surprising to realise that this monumental piece is in only four parts with an extra tenor in the refrains, yet the melodic and consequent harmonic creativity never flags. This is complemented in a performance of sustained clarity and excellence, conveying the meaning of the text - Psalm LI, Have mercy upon me O God  - and implying the circumstances of Savonarola's meditation upon it, while never slipping into gratuitous theatricality. There could be a case for suggesting that this is the best performance on disc of a motet by Josquin.

Lheritier, one of the Lost Generation whose work is now being discovered and appreciated, sets part of the same text in six parts. He is thought to have been a pupil of Josquin, and his setting, although referring briefly to Josquin's, is more luxuriant in its sustained use of all or most of the parts and a more astringent harmonic palate. This is another glorious work and, when the work ends, it comes as a surprise that it is timed at over nine minutes.

Setting In te, Domine, speravi, part of Psalm XXX on which Savonarola also meditated, Gombert produces a work of intense and almost driven beauty, a premiere on disc mined from the "Lost" repertory. The thicker textures in no way imply any cloying or lack of momentum. The polyphony is crystal clear. The final cadence brings to mind the one that concludes Byrd's early masterpiece in eight parts Quomodo cantabimus, the only place where Byrd uses it, emphasizing that in neglecting these composers, posterity has also been neglecting the considerable debt owed to them by their illustrious English successors, from Taverner via Tallis to even as late as Byrd.

For those of us easily bored by the upbeat major-key Palestrina, it is a pleasure to encounter one of his works that is so clearly influenced by his Franco-Flemish predecessors. Tribularer, si nescirem  is audibly in the succession of the three composers just mentioned, yet has all the hallmarks of the "classical" Palestrina in its smoothness of line and absence of discords. None of the latter is to sacrifice the emotional weight of the piece. One can only express regret that more of this side of the composer is not performed more often instead of the usual sunnier (and frankly sometimes blander) fare.

Something similar could be said about Lassus. Early in the revival of Renaissance music a few of his pieces became embedded in the repertories of sacred and secular choirs, to the detriment of his more interesting output. Where are the recordings of a piece such as his Ad Dominum cum tribularer? Rightly there are many versions of Byrd's huge setting in eight parts, yet the slighter but still impressive setting in six by Lassus is unrepresented in the current catalogue, and is seldom performed (The Cardinall's Musick sang it last year at the Cadogan Hall in London). However, an early music insider with good contacts to performers recently told me that Lassus is box office poison in Britain when it comes to public performances. One wonders why. For all its rich texture and occasional chromaticisms Infelix ego  is not the best piece on this disc, possessing neither the contrapuntal flow of The Lost Boys nor the more modern narrativity of Palestrina and Byrd; perhaps it is as much about who he is not, as much as who he is.

Le Jeune's setting of Tristitia obsedit me  is a bracing piece that hints at the words "non cessat", and increasingly thereafter, that its composer particularly excelled in secular vocal music. Magnificat give it a deservedly good hearing.

The final piece on the album is also chronologically the latest, Byrd's Infelix ego. Now that the early music movement is hopefully over the stage of stifling any feelings in or for the music (without resorting to histrionics of course) it can be appreciated that Byrd was deeply engaged with the text, and probably with the circumstances in which it was written. The result is precisely what I mentioned above - feelings without histrionics. As ever, Byrd takes the listener on a journey: he has a narrative, he tells a story, he relates a set of circumstances, he expresses a proposition, and the music keeps moving. Polyphony is the vehicle for much of this, getting us from A to Z with occasional climaxes where needed, and homophony plays a part in punctuating the ride, or changing the perspective, and also providing climaxes. No work in Byrd's canon illustrates this better than Infelix ego  with incidental details such as where Byrd reduces his textures to draw attention to where Savonarola asks questions, or where towards the end at the critical word "misericordia" he introduces the massive and unprecedented A flat chord in a piece "in" B flat major. It is perhaps at this chord where Magnificat score over the many alternative versions. At one extreme Stile Antico's interpretation is intense and introverted (Harmonia Mundi HMU 807463); at the other, The Cardinall's Musick's version is passionate (Hyperion CDA67779). In Stile's version the A flat chord creeps up on the listener stealthily; in TCM's, everything seems to be heading that way and they throw the kitchen sink at it though not in any tasteless or brash way - this is a brilliant choir putting their collective lungs to a climactic moment. Then among several others of distinction there are outstanding versions by Contrapunctus (Signum SIGCD 338) and Oxford Camerata (Naxos 8.550574) each with their own USP. Yet somehow, Magnificat's magical sounding of this pivotal chord in the context of their beautifully sung mainstream interpretation renders it the most effective and indeed affecting of all the available versions, leastways at this crucial point: a fitting conclusion to a thoroughly distinguished recording. 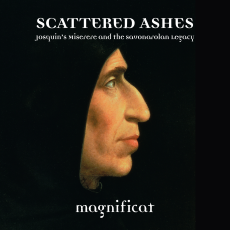