My wife is my biggest critic, and over the twenty-plus years we've known each other, she's developed this almost folklore with regards to me that she delights in sharing with just about everybody. It concerns (in her eyes) my greatest talent, which is my ability to assign blame, or re-assign it; in any case, I'll almost surely succeed in deflecting any responsibility from myself for the consequences of any actions on my part. Let's face it - nobody likes being wrong, or being told they're wrong - sometimes, however, we just have to face the facts.

Which makes this whole sequence of events even more painful for me, because I've always prided myself on my ever-increasing knowledge of music - especially, recorded music - and (what I regard as) a singular ability to recognize a well-done, idiomatic performance, and to easily discern the sonic merits that lift a particular recording above the pack. And God knows, there are plenty of contenders for the enviable position of being considered a "reference" recording.

So when Caroline Dooley from Linn Records contacted me recently regarding my impressions on the surround content of the Tallis disc in question, I was a bit taken aback. She informed me that Linn has been recording in surround sound for quite a while, it seems, and only recently - with the advent of the SACD medium - could these recordings be presented in their original multichannel format. She also offered to have original session producer Philip Hobbs contact me with additional technical information about the sessions. I assured her that I was reasonably certain that my original review was correct, but I also offered to spend more time with the disc.

Which makes this even more embarrassing for me, because I generally have a really great reviewing ethic, and spend a considerable (usually scattered across several weeks) amount of time with each disc I have for review. Nothing that I listen to gets really short shrift, unless it's just unbearably God-awful, right-out-of-the-gate. And I feel that my system is of sufficiently good resolving power to allow me to experience the subtleties and nuances of any good recording. That makes this situation even more perplexing to me - how could I have dropped the ball so obviously here? Please forgive me if I seem to stammer a bit - it's probably because I'm choking on the rather large crow I'm currently chewing, while also trying to explain away my shortcomings.

There's no way I can escape this - I was dead wrong about the Tallis disc. Immediately upon replaying the disc, it was perfectly obvious to me from the first few notes of the opening track "Te lucis ante terminum," what a huge mistake I'd made. The surround soundfield was impressive, fully centering me within the group of vocalists. The same is true for all the works here that were recorded at St. Jude's on the Hill (an oft-used classical recording venue near London), and especially striking in its effect on the title selection "Spem in alium." The eight individual choirs begin singing at prescribed intervals throughout the work; each choir successively joins from across and around the soundstage, then join their voices for the final chorus - the power and majesty are both overwhelming and breathtakingly beautiful at the same time, and the dynamics will challenge any system.

The disc utilizes only four channels - the center channel is excluded from the mix, but the recording is offered an exceptionally seamless presentation. And although an "in the round" setting such as this is not typical for a choral recording, it's a very natural-sounding and wholly enjoyable effect.

The remaining two works, the "Mass for 4 Voices" and "Lamentations" only incorporate four and five voices respectively, and are from a different recording venue and in a more traditional acoustic setting. The recording preserves an excellent representation of the performance soundspace; the perspective is up-close, but the vocalists are bathed in the ambience of the recorded acoustic.

All being said, I've revised my rating to Five Stars, and give this disc my whole-hearted, highest recommendation. This disc will provide an ample test to the ability of your system to resolve massed voices; most people scoff at the SACD standard which calls for full-range speakers all-around, but with as much information as is presented on this disc, smallish surround speakers may run out of gas trying to keep up! And the performances are both idiomatic and excellent. I do, again, apologize for the circuitous manner in which this review has evolved, and offer the following advice to anyone so inclined: listen well, and know what the heck you're talking about 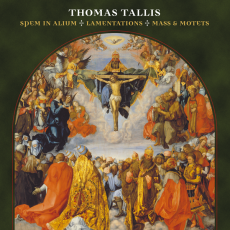