Connoisseurs of fine pianos and fine sound might find themselves more engaged by the second volume of the Ravel piano music from Portuguese pianist Artur Pizarro than they were by the first, fine though that was. The first volume of Pizarro's collection was recorded in Portugal in 2006 with a standard Hamburg Steinway D. Volume Two finds lovely nuance in the sound of a less commonly heard Bluthner nine-foot concert grand. It's an instrument with a more haloed treble than the typical Steinway, and with a less woody sound than the Bösendorfer Gordon Fergus-Thompson used for his ASV recordings. Volume Two of Pizarro's cycle offers a more inviting tone than the more neutral theatrical venue used in the earlier instalment. In terms of performance, what is remarkable is that much of Pizarro's first instalment was at rather fleet tempos, particularly in a swift and impressive Gaspard de la Nuit. Volume Two explores more spacious speeds, particularly in Le Tombeau de Couperin, where Pizarro takes close to 26 minutes, slower than the modern average. Does the piano, with its rich, slowly decaying overtones, have anything to do with that? Hard to say for sure, but it's possible.

Le Tombeau de Couperin is arguably the most important item in Pizarro's second disc, and it may have been the reason for the player's choice of instrument, both in terms of the piano's sound and, more specifically, in how he interacts with the instrument. The Bluthner's gleaming treble suits Ravel's neo-classic work well in brightness, but its overtone richness is also consonant with a more spacious approach. In this, Pizarro vaguely echoes Gieseking, who is the only player who clearly conveys that this is not happy music; that the movements, for all their surface charm, are little epitaphs for friends Ravel lost during World War One. Pizarro captures this feel in places, though he's a little too offhandedly chipper in the Rigaudon. My favourite part of Pizarro's rendition is the broadly paced Forlane, which has a lovely, mysterious quality not unlike the way Stanislaw Skrowaczewski handled the orchestral transcription in his orchestral recording of Le Tombeau for Vox in 1974. Those who rush through this movement miss an exquisite harmonic agony. Pizarro gives it room to register on the senses.

Pizarro's Valses nobles et sentimentales, the finest thing on this album, are very much influenced by the sound of his Bluthner piano, with its bright but gauzy upper register. This gives everything a shimmer of treble sound, which Pizarro wisely plays against in many places, using clipped phrasing to keep notes clear despite the lovely halo surrounding them. He also uses this built-in sheen as a way to turn his attention to slightly but noticeably more spacious explorations of this music than is customary. If Gieseking is sober, Berezovsky is glittering, Ousset is gentle, Rogé is poised and Entremont is haughty in these evocations of the dance, then Pizarro is easily the most richly poignant. Take, for example, the tiny sixth waltz, marked "Vif." Most performances dash it off in a tipsy whirl, around 35 to 40 seconds. Pizarro takes slightly longer, around 45 seconds, giving his performance the slight lag of a celebrant who is already past tipsy and heading toward emotionality. The ensuing instability of tempo Pizarro uses to colour the desperate, leaping joy of the next waltz, thus follows perfectly. His final waltz is slow, tinged with long shadows of regret, finding some powerful psychology in music that is all too often treated as pure surface. Linn's high-resolution recording is especially delightful in the way it captures a rich range of overtones, particularly in the closing measures of the final waltz.

I like Rogé's understated elegance in the Sonatine, which Pizarro comes close to matching, albeit with his much different piano's sound and consistently broader tempos. For those more interested in hearing the piece regarded as a virtuoso display, there's always the 1994 Teldec recording by Boris Berezovsky. His first movement is hardly "Modéré," and his finale goes well past "Animé" in tempo, but it is impressively glittering, in its way, and is nicely recorded. Cécile Ousset hit a nice balance between the showy and the reserved in her 1988 EMI recording, for those interested in that option. The structural-minded Gordon Fergus-Thompson is in his element here, with a fine and feisty rendition.

The smaller works are what they are, which is to say pretty much filler. The most substantial and famous of them is the Pavane pour une Infante défunte, where Pizarro breaks his tendency toward slower tempos and goes for a nicely flowing rendition. He perhaps keeps in mind Ravel's droll reminder to a student that it was supposed to be a pavane for a dead princess, not a dead pavane for a princess. For that matter, though, I don't think the piece loses much even if it is moved along even faster, as Perlemuter did in his 1957 Vox recording. The Menuet antique is handled spaciously here. This is a good thing, because the resonance and overtones of Pizarro's Bluthner grand are so thick, it's almost like a blinding white sheen of sound when Ravel starts the piece with those closely-spaced high chords. If Ravel was after a sunlight glinting on marble kind of effect, Pizarro has certainly caught it here. The other pieces, none of which would get recorded very often if they weren't part of the complete piano works of Ravel, namely, the Prélude, the Menuet sur le nom d'Haydn, and the two À la manière pieces, are played patiently, with emphasis on the distinctive sound of the instrument.

As noted above, the recorded sound here is warm, gleaming and intimate. The multi-channel layout is presumably 5.0, as the subwoofer channel isn't needed for this music, but the disc's small print doesn't clearly say. Suffice to say that this is up to Linn's premium sound standards. 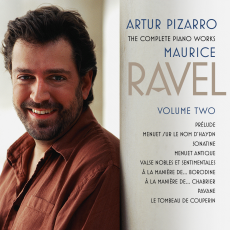