The Moldovan violinist Patricia Kopatchinskaja doesn’t toe the line. Her performances of core repertoire are emotionally supercharged: some listeners balk at the extremities, while others (myself included) tend to be enthralled by the energy. She plays barefoot, often dressed the part in folk costume for Bartók or androgynous trouser suits for Tchaikovsky. Regardless of whether a specific interpretation works or doesn’t, there’s no doubting her capacity to jolt an audience into engaging with the repertoire afresh.

That ballsy stage persona resonates everywhere in her new duo album. ‘With this piece we want to clean our ears,’ she writes of the opening track, Jorge Sanchez-Chiong’s raucous Overclockers V, in booklet-notes that take the form of a verbatim conversation with her seven-year-old daughter. The concept might seem contrived from anyone else. The album contains 24 short duets with sparring partners including clarinettist Reto Bieri, violist Laurence Dreyfus and guitarist Pablo Marquez. Repertoire roams Claude Vivier’s vivid, strangely mournful Pièce for violin and clarinet to John Cage’s hotly lyrical Melody No 4; from Giamberti’s CuCu (with ocarina) to Biber’s Sonata representativa via Holliger, Martinu, Falla, Milhaud and more. It’s quite the taster pack of violin sonorities; if only every seven-year-old had a musical induction that paid so little attention to conventional genre boundaries.

Kopatchinskaja’s performances are gripping. She plays, sings, narrates and laughs with fierce commitment and unbound, hot-blooded expression. Only the final track didn’t work for me: a spiky, restive account of the Chaconne from Bach’s D minor Partita with Anthony Romaniuk adding busy harpsichord improvisations. It’s impassioned playing but cluttered and hectic. Elsewhere there are moments of real stripped-back simplicity: an absorbingly still, pliant account of an 11th-century Alleluia from the Winchester Troper, for example, or the husky, introverted swing of ‘Nana’ from Falla’s Suite populaire espagnole. 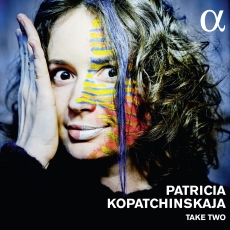