I had the good fortune at the start of the year to review Piotr Anderszewski’s exceptional selection from Book 2 of the Bach 48 (Warner 9029511875 - review). Now I am doubly blessed by receiving this first volume of what Phantasm are calling The Well-Tempered Consort. The first volume features music from the Musical Offering and other pieces by Bach alongside selections from both books of the 48. The second volume (review forthcoming) is devoted exclusively to the Well-Tempered Clavier.

Listening to this recording throws up some interesting questions about authenticity and Bach. On the one hand, Phantasm clearly embrace the latest scholarly ideas concerning performance practice yet playing this music as a consort of viols is anachronistic and involves playing an arrangement. This said, playing Bach on the modern piano, as Anderszewski does, is a form of arrangement even if he does not tamper with the notes. The obvious conclusion is that it doesn’t really matter so long as the performance sheds new light on very familiar music which both Anderszewski and Phantasm both do in their own ways.

What they do have in common is seeing each piece, prelude or fugue or whatever, as a character piece rather than just a technical exercise. I found the notes to both volumes of the Well-Tempered Consort, written by Phantasm’s founder and leader, Laurence Dreyfus, highly inspirational. He quotes Robert Schumann as describing the 48 as “character pieces of the highest type, truly poetic creations, each of which demands its individual expression, its individual lights and shades”. I feel this spirit illuminates both volumes.

Phantasm are particularly attuned to the dances which underpin most of the preludes and the fugues. I suspect this is the fruit of a career spent exploring earlier consort music where the links to dance forms are even more direct. Their approach to these dance rhythms involves a light touch and with no hint of exaggerated earthiness, which I think is correct. It seems highly unlikely Bach ever intended anyone to actually trip the light fantastic to this music!

As with a lot of Bach’s music arranged for viol consort (I think of Fretwork’s wonderful version of the Art of Fugue), having the voices one to a player relieves the pressure there is on a keyboard player to make each voice distinctive. This greatly adds to the individual character of each piece. The pieces become genuinely discursive rather than just contrapuntal textures, each voice a separate, distinctive actor in the drama. Hearing this music in this way only makes me marvel more at Bach’s absolute mastery of counterpoint.

We are fortunate to live in an era where standards of recorded sound are remarkably high but, even by those standards, the sound quality of this release in high-definition (24/192) download is pretty spectacular. This is like having Phantasm giving a private concert for me in my lounge. The refinement of their playing stands up to this sort of scrutiny. At one point, Dreyfus mentions that transpositions of the original keys have been chosen on account of the beauty of the resonances with the instruments. To have those resonances so beautifully caught by the engineers is almost enough alone to make this recording worth buying.

As for the selections, Phantasm have a real ear for what might be called ‘Bach the modernist’ and particularly relish tangy chromatic dissonances. I think of the two pieces from the Musical Offering which sound like Bach arranged by Bartók in places. This is the Bach that prompted Webern’s famous arrangement, or the Bach of the final movement of Berg’s violin concerto. It is wonderfully bracing stuff.

In case the reader is worried that this CD is somehow an astringent listen, I would urge them to try the E major fugue from Book 1, though in fairness you could drop a pin on this collection and turn up a treasure. This particular fugue also demonstrates an additional pleasure to be had from these arrangements. The fugue subject fits a bowed string instrument so well – or conversely is slightly awkward on a keyboard instrument – that I couldn’t help but speculate, as Dreyfus admits to doing in his notes, on possible alternative origins for the music. Bach’s mammoth compendium opens even further! Those of a more scholarly bent should be reassured that I am making no academic claims here. This is just an illustration of the effect this music making has on my imagination.

This is no rag bag of assorted Bach goodies. Clearly a great deal of thought has gone into the sequencing of the various pieces. The jewel in the crown of this programme is the magnificent Kyrie, Gott Heiliger Geist from the Clavier Übung III, BWV 671. All of the many qualities of this recording come together in this performance – sensitive arrangements, stellar recording (the bass viol gave me goosebumps!), the gorgeous singing tone, the intellectual grasp of the way Bach builds his contrapuntal texture, and something that I can only think to call vision. This may be intimate music making but it is monumental in scope.

This disk came out in 2020 when, had I heard it, I would have made it my recording of the year. Phantasm, as already mentioned, have recently released a second volume. I very much hope they are not yet done with Bach. 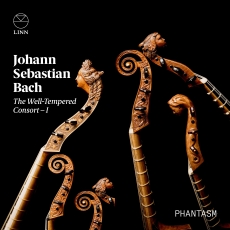