This recording was made in March of 2009 and was first released that year and reviewed by Ardella Crawford (J/F 2010). It is now reissued, with the same catalog number, in Linn’s “Echo” series of reissues.

John Ward (c.1589-1638), one of the late- Elizabethan composers who extended English Renaissance music into the early Stuart era, wrote both vocal and instrumental music. In the latter category he wrote almost entirely for viols. His chief legacy is two collections, one of 12 Fantasias for 5 viols, the other of 7 for 6 viols; there is also one 5-voice In nomine composition and two for 6 parts. Some of them have been sampled in recordings, but this release brings all 23 pieces together for the first time.

Like his madrigals, these consort works are not “audience music” in our terms. They were created for the pleasure and stimulation of the performers. One can readily recognize Ward’s skill in teasing his players with melodious flow in polyphonic texture, and with harmonic tricks. The five-voice Fantasia No. 3, for instance, is a clever study in extended chromaticism: the textures meander from one suspension to another, as if we are never to be sure of cadence or tonality.

The playing combines alertness and fine color with an appropriate leisureliness. Phantasm recorded another program, of Ward’s vocal and instrumental pieces, also reissued in the “Echo” series (Mar/Apr 2015). 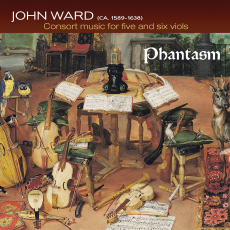