This is, if I may be forgiven for employing a quartet of over-used adjectives, a lush, glorious, moving, sublime disc. It also happens to represent a welcome exposition of yet another largely unsung genius of the late renaissance - the Netherlandish composer Philippe Rogier, of whose work only about a fifth survives, thanks to the Lisbon earthquake of 1755 and the fire at the Spanish court in 1734.

Rogier spent his working life, from boyhood to retirement, in the Iberian peninsula. He served Philip II, becoming director of music at 25. The music's style is intriguing. There's a leaning towards the mannerist chromaticism of Gesualdo evident in, for instance, the motet Vias tuas - though unlike Gesualdo, Rogier is tastefully sparing with such treatment of texts - while generally a certain Spanish sensibility informs the flavour of his compositions. They have the darkness, the restrained drama, the intensity, the bold colours of Morales, of Guerrero, of Victoria (and yes, of El Greco, too). Yet there's also the refined, smooth technique cultivated by his Flemish forebears, Josquin and, and particularly, Gombert. Indeed the central work on this disc, the Mass Ego sum qui sum, is a parody based on Gombert's motet. It was published posthumously - always a good sign of the contemporaneous significance of a composer - along with five other Masses in 1598. The Gombert proves to be a work of complex textures, structurally accomplished, artfully climactic. The Mass follows suit in these respects, but also follows rather too swiftly on the heels of its modal motet. A slightly longer pause for contemplation before Rogier's gloriously, majestically sonorous, cadence avoiding Kyrie would not have been out of place, for any number of reasons.

Other than the Mass, there are motets such as Peccavi quid faciam tibi, whose falling motives cascade and tumble into each other like a waterfall in slow motion; and Dominus regit me , which shows a Josquin-like variety of scoring. Philip Cave's astute direction lends the music impetus. A deeply experienced singer of this type of music, he also obtains a sublime blend of voices from his young ensemble. The acoustic of Douai Abbey as captured by Linn's engineers sounds just gorgeous suffusing the music in a golden warmth while retaining remarkable clarity. 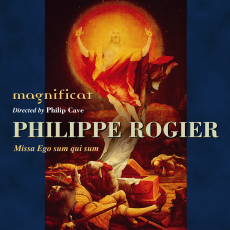