Fresh from his successful survey of the four Schumann symphonies, Robin Ticciati takes on the somewhat more formidable quartet of Brahms symphonies. He is again with the Scottish Chamber Orchestra, which he served as principal conductor from 2009 to the end of the 2017-18 concert season. Like his Schumann effort, this set features a lean, detailed approach that is mostly very effective. In all the symphonies Ticciati is fairly faithful to Brahms' markings in tempo and dynamics, he also uses the same sized ensemble Brahms was writing for and employs instruments from the composer's era, including small-bore trombones and Viennese horns. So we have the symphonies in a manner that closely mimics how they were heard in Brahms' day even to the point where portamento, vibrato (viewed as an "ornament" here) and other such features are employed according to later 19th century traditions. Thus, with an arguably genuine Brahmsian take and performances that feature accuracy, precision and plenty of spirit, some will say that you couldn't possibly want more.

To some potential buyers, this kind of historical authenticity will be a crucial factor in whether or not to purchase. To me, what is more important are the interpretations and performances themselves. One might assert that if you favor a more epic Brahms, a more Romantic Brahms and a less rigid style of interpretation, you might find this set at odds with your taste. Ticciati's approach can sometimes exhibit a feeling of inflexibility, a by-product of scrupulously following performance traditions and the score's markings in what some might regard a pedantic way. Sometimes a natural sense of flow is disrupted, if only slightly. Try, for instance, the first movement of the Fourth Symphony and notice in the exposition that at 1:14 (and again at 1:22) the strings seem to take a cautious breath before easing downward, the beauty of the music still shining through but sounding somewhat calculated, its linear motion momentarily tentative. In addition, the less frequent use of vibrato and the more objective sense of phrasing strip away some of the warmth from slow movements. Again, try the Andante second movement of the First Symphony, where the music is beautiful all right, but emotionally somewhat icy. Also, in the second movement of the Second, you notice right off the same sort of emotional neutrality in the statement of the main theme by the cellos.

Stepping out of devil’s advocate mode, I observe that one cannot treat the examples cited above as major flaws, maybe not even as particularly significant ones. For one thing, Brahms wasn't a gushing Romantic with surging emotions and sudden bursts of fiery passion; in short he wasn’t Tchaikovsky—and Brahms was glad of it! Thus a more objective and authentic approach is valid—and quite welcome in most quarters too. Moreover, Ticciati usually gets to the heart of each work: the first movement of the First sounds tragic and tortured, and the finale does end with a true "free at last" feeling of joy and triumphant resolution. The Second may not be as epic-sounding as in other performances, but it is sunny, muscular and surprisingly more playful than usual. In the end it is quite convincing on its own more modest terms. In many ways the Third benefits most from Ticciati's approach, its lighter character actually taking on greater consequence and weight, making this symphony come across nearly as imposingly as the others. The Fourth may sound a little stiff in places, but its complex and mysterious character, notably in the outer movements, is more lucidly presented here, thanks in great part to Ticciati revealing all sorts of consequential detail.

In addition, while the lyrical music’s warmth is generally less present in the four works, it is replaced by a freshness and lift. The Third Symphony’s third movement, for example, can sound gloomy and even morose in some performances, but in Ticciati’s hands it actually has a lovely singing quality and at times a welcome brightness. The second movement of the Fourth also displays a more sunny character: when the violins take up a variant of the main theme at 2:33 the music turns luminous, utterly ecstatic, and much of the remainder of the movement also has a brighter cast. So, there is so much to enjoy in this set. Yes, the conductor can be a little fussy at times, but he is almost always insightful and totally engaging.

Linn provides excellent sound and the album notes, which include a short essay by Ticciati himself, are most informative. Before citing alternative choices, I must refer the reader to John Quinn’s enlightening and highly detailed review of this set. His thoughtful analysis will certainly help those considering purchase. Other Brahms symphony sets I have favored are as follows: the ageing Walter (Sony), and the more recent efforts by Chailly (Decca) and Gardiner (Soli Deo Gloria). I also found the very lean Dorati interpretations on Mercury, recorded from 1957-63, to be compelling, if a little rough around the edges. My preference among these four would be Chailly and Walter, but I’ll now have to add Ticciati. His ensemble plays exceedingly well for him and while his interpretive stance is not quite unique, it is unusual, provocative, and masterfully conceived. For Brahmsians, this set might be considered an essential acquisition. 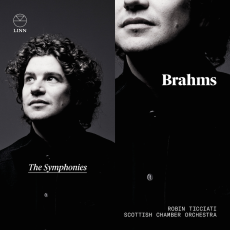