During his tragically brief life and unparalleled career, Mozart was able to master just about every form of instrumental and vocal concert music then in existence. That genius also extended to "occasional" pieces-works intended to serve as background entertainment for social and political functions. And while it might be reasonable to assume that Mozart approached these occasional works with a reduced seriousness of purpose, the results speak otherwise, and with profound eloquence. Perhaps Mozart took heed of the advice offered by his father, Leopold, who wrote that "what is slight can still be great if it is written in a natural, flowing and easy style-and at the same time bears the mark of sound composition." In his superb program notes (reprinted from the Philharmonia Virtuosi's survey for Vox of the Mozart divertimentos and serenades), Robert Levin quotes Alfred Einstein's observation of the occasional music: "There are people who would trade a whole act of Tannhäuser or Lohengrin for one of these works, a lost paradise of music." Readers of Fanfare are well aware that no such exchange is necessary! In recent years, Mozart's occasional music, scored for various combinations of instruments, has earned its rightful place, both on the concert stage and recordings.

A new recording of Mozart occasional music, issued by Linn Records, and performed by the Scottish Chamber Orchestra Wind Soloists, is one of the finest of its kind. The works, featuring an ensemble comprising pairs of clarinets, bassoons, and horns, fall into two categories. The Serenade in E?, K 375, is an example of Harmoniemusik; occasional music scored for pairs of bassoons, horns, and various treble instruments. In Mozart's original version of K 375 (1781), included on this recording, the treble instruments are the two clarinets. Later, in order to conform to the popular trends in Vienna, Mozart added a pair of oboes. The remaining four works on the recording, all bearing the title of Divertimento, are examples of Tafelmusik, or banquet music.

The Scottish Chamber Orchestra Wind Soloists' performances of these works are superb in every way. First and foremost is the marvelous sense of collaboration between the artists. That sense of collaboration is evident not only in the remarkable precision of ensemble, but in the miraculous balance and blending of instrumental colors. The performances always radiate a sense of affection for the music, and joy in its collaborative interpretation. The excitement of these technically brilliant recordings is enhanced by an acoustic that is warm, detailed and closely miked, affording the listener the sense of being on stage with the artists, if not right within the ensemble setup. If you've never sampled Mozart's occasional music for winds, this Linn disc is an ideal place to start. Even if you have other recordings of this specific repertoire, I urge you to give the new release a try. It's a wonderful example of great music being given its full due. 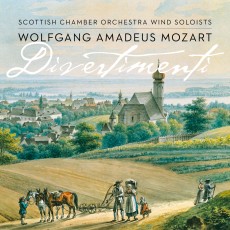