This is Stravinsky in his best neo-classical vein. Alexander Janiczek conducts the Chamber Orchestra of Europe in supple and persuasive performances that show clearly why this was such a special time in the composer's ongoing development. Beginning with Apollon Musagète (Apollo of the Muses)...

Both the subject matter and the style of Apollon pay homage to the aesthetic of the French Baroque, but with a difference. Here, Stravinsky deliberately confined himself to the most chastely classical of means, avoiding violent contrasts and paring the elements down to their simplest form. He used only the strings of the orchestra in order to cultivate the purest classical lines. While honoring the era of Lully and Couperin, he eschewed all baroque embellishments. Right from the beginning of the ballet, "The Birth of Apollo," the string line has a beautiful long arching form and an attractive sound based on a pure diatonic harmony.

What Stravinsky aimed at in Apollon was a ballet blanc, the most basic dance forms unencumbered by a story with the usual romantic elements. "Discipline and restraint . . . sustained oneness of tone and feeling" was his objective. The story is almost beside the point. Apollo meets and dances with three of the Muses, handmaidens of the arts: Calliope (epic poetry), Polyhymnia (sacred hymn), and Terpsichore (dance and choral songs). After a nobly eloquent pas de deux, he leads them off to their home on Parnassus, but not before the music changes its character and we hear the rhythms of modern popular dance in the Coda. The mood becomes dark and unsettled in the Apothéose at the very end, perhaps reflecting the between-wars malaise of the times. It is as if Stravinsky, the modern man, exiled from his native land, were speaking to us in his own voice. Janiczek and the COE capture this mood better than I've heard it done elsewhere.

When Sergei Diaghilev, impresario of les Ballets Russes, suggested to Stravinsky that he compose a work based on the spirit of 18th century Neapolitan composer Giovanni Battista Pergolesi, the Russian composer at first demurred, then found himself utterly enchanted by the music: "I looked, and I fell in love." The result was the ballet Pulcinella, one of Stravinsky's most happily inspired creations. Here, baroque meets modern in the form of recomposed dance melodies and arias given heightened rhythmic and dynamic emphasis with cunning harmonic touches and off-beat accents that make the work more of an original creation than any mere arrangement could possibly be. The thumping beats, the exaggeratedly languid musical line of the Serenata, the frenetic pace of the Scherzino, Tarantella, and Finale, all are pure Stravinsky. And he replicates the oddly assorted composition of a band of street musicians in the person of a slightly flat trombone and a groaning double bass in the Vivo movement. As with Apollon, the performance by Janiczek and company is a revelation. 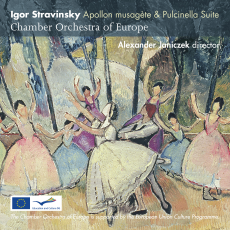 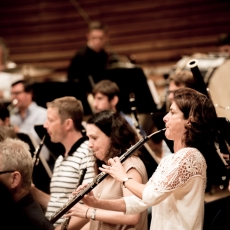