This is an issue of considerable importance. Thomas Erskine, 6th Earl of Kellie (or Kelly, as he is often known) is one of the most important British composers of the 18th century, but this is the first disc to be devoted solely to his music. He was born on September 1, 1732 into an aristocratic, but poor family of Scottish landowners. He apparently learnt the violin at an early age, later becoming known to his retainers as "Fiddler Tam", the title of the present disc. The family's somewhat straightened circumstances were not helped when his father backed the wrong side in the 1745 Rebellion, thus ending Kellie's formal education. Around 1752 he went to Europe, spending much of the next four years in Mannheim, where he had violin and composition instruction from Johann Stamitz. On his return, Kellie set about propagating the modern "Mannheim style", of which he was to become widely acknowledged as the leading British exponent. The early 1760s found Kellie spending much of his time in London, where the overture he composed for the hugely popular pastiche The Maid of the Mill (Covent Garden, 1765) achieved exceptional popularity. In 1767 the Earl returned to Scotland, where he not only became a leading light of the Edinburgh Music Society, but also enjoyed a dissolute life style, founding an all-male club of somewhat dubious repute, and imbibing generously of wine, women and song. It is said that the playwright Samuel Foote advised Kellie to put his nose into his greenhouse to ripen his cucumbers! Such pleasures inevitably took their toll, since by his mid-40's Kellie had apparently become a physical and psychological wreck who died at Spa in Belgium, where he had gone to take the waters, on October 9, 1781. Kellie's carelessly cavalier attitude to life (by no means unique among the aristocracy of 18th-century Britain) seems to have extended to his music, which he had a tendency to give away without further thought for it. The result is that much is today lost, although the discovery in 1989 of a manuscript at Kilravock Castle brought to light a number of chamber works, two of which are included on the present disc. The influence of Stamitz is clearly apparent in the fine three-movement Overture (Symphony) in C, the second of a set of six published in Edinburgh in 1761. The opening Allegro in particular bristles with such Mannheim effects as strong thematic and dynamic contrasts, buzzing, urgent sforzandos, and, of course, examples of the so-called "Mannheim crescendo", but the finale is a triple-time Presto that owns to a very British clear-cut sturdiness. It is small wonder that the splendid Maid of the Mill overture, also in three movements, became so popular. Although showing considerable Mannheim influences, the sense of real drama, and ebullient good humor are very English (if I may be excused using the word about a Scottish work), while the sentimental Adagio, with its many felicitous wind passages, bears admirable testimony to Kellie's ability to write memorable tunes. But the best of all these works is surely the String Quartet in A, which reveals Kellie as a composer of real substance and distinction. The opening Allegro is beautifully constructed, combining bright Haydnesque verve and vitality with more lyrical episodes, while the central F-sharp Minor Adagio (based on a theme by Barsanti) is profoundly expressive, particularly at the start of the second half, which moves into a world of intensely felt melancholy. Only marginally less impressive is the C Minor Quartet, here played by a full body of strings, its tense, nervous character maintained throughout much of its course. Interestingly, the outstanding notes by John Purser suggest that the mood of the quartet may owe as much to such Scottish influences as Ossian as to more obvious associations with Sturm und Drang. The two trio sonatas are lighter, companionable fare that, like those of Gluck reviewed elsewhere in this issue, concentrate more on the principal melodic line (here violin in the E Major, flute in the G Major) than equality between parts. The concert aria and song (both very appealingly done by Mhairi Lawson) are also distinguished by their strong melodic appeal, the former again tapping into the vein of melancholy that seems to have played an important part in Kellie's musical make up. The Reel, and Largo make for a nice contrast with the concert works, their folk material proving that Kellie was quite happy to don his kilt. This intriguing cross-section of Kellie's works is expertly performed by Concerto Caledonia in a totally disarming spirit of proselytizing affection. There may be the odd untidy moment, but that matters little given the obvious love for the music that is evident throughout. And it is worth it; this is music of far higher quality than much being written in Europe at the same time. Finally, everything here demonstrates convincingly that the old canard (still heard in some quarters) about all later 18th-century British composers being in thrall to Handel is nonsense. 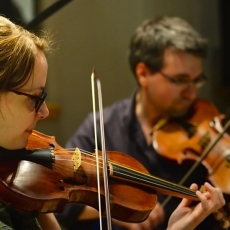