I am totally thrilled to bring to your attention, on my return from annual leave, something remarkable and completely extraordinary in the music business. Now then, if you are an eagle-eyed diehard, impassioned music lover, or one of those many hyper-alert enthusiasts who are quick to spot the potential in something rare, unusual and clearly fascinating, you will possibly have got there before me. i've been sitting impatiently on this for a fortnight while out of town on holiday, with others filling this space in my absence. Enough teasing: what am I going on about?

There is an amazing new CD release from Glasgow-based Linn Records which has been on the shelves for a couple of weeks now. It features new recordings of two consummate masterpieces for symphony orchestra: Mahler's absolutely lovely Fourth Symphony and Debussy's sultry, 10 minute miracle of music, l'apres-midi d'un faune. I can almost hear the reaction: ‘Are you kidding, Mr T? Two of the most popular, best-known, most frequently played and recorded works of the past 150 years? There are so many recordings of these by so many orchestras and so many conductors they are almost 10-a-penny.'

If you are already outraged at this insult to your knowledge and intelligence, I'm about to make it worse and twist the knife. Guess who the musicians are in these versions? They are students. and guess which orchestra is playing these great masterpieces by Debussy and Mahler? It's not a symphony orchestra at all; it's a small ensemble of just over a dozen players; and the Maher Four and l'apres-midi they are playing are not as written by the composers. These are arrangements: stunning, astounding arrangements, but arrangements none the less.

Here's the background. Early in the last century, Viennese composer Arnold Schoenberg had become extremely concerned about the paucity of performances of new and recent music, and the lack of opportunities for composers to have their music aired. Schoenberg, of course, was a pioneering modernist; but he didn't refer only to his own music, or that of his inner circle. He included the music or composers as diverse as Richard Strauss and Claude Debussy.

In 1918, he did something about it. Schoenberg founded an organisation called the Society for Private Musical Performance. The aim of the society was ‘to make careful and thoroughly rehearsed performances of new and recently composed music available to committed music lovers'.

Of course, the society couldn't afford to hire symphony orchestras. The music thus had to be reduced and arranged for smaller groups. Schoenberg didn't do it all himself, though he was the dominating figure. He enlisted other trusted composers and his most gifted students to undertake the demanding work which insisted on preserving the character and integrity of the original composition.

Schoenberg was not a populist; he was a purist, and ran the society in that way. You couldn't just walk into a concert: you had to join the society. Programmes were not announced in advance. Applause was not permitted. Critics were forbidden entry. It was an astonishing enterprise. In the three years of its existence, the society stages more than 300 performances of 154 works, including Mahler symphonies and music by Ravel, Stravinsky, Bartok, Debussy, Strauss and many others.

this first collaboration between Linn Records, conductor Trevor Pinnock and the student soloists of the Royal Academy of London, will lead to a broad exploration of the society's arrangements. Obviously, there is more to come in this electric project. The brilliant, revelatory Mahler/Debussy disc will be reviewed in next weekend's Sunday Herald. And if you think you know your Mahler Four and l'apres-midi, think again. 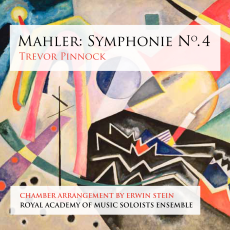