Trevor Pinnock celebrates his 70th birthday with a harpsichord recital embracing the mid-16th to mid-18th centuries. The travels of Spanish composer Antonio de Cabezon, Pinnock tells us, provided the source of inspiration for his own 'Journey' and it is with his music that he sets out. England and the Netherlands are represented by Tallis, Byrd, Bull, Handel and Sweelinck; Italy by Frescobaldi; Germany by JS Bach; and returning to Spanish soil Pinnock concludes his colourful odyssey with three of Domenico Scarlatti's finest Sonatas which he first recorded 35 years ago.

The programme is rich in expressive contrasts and diverse musical forms in which dance and variation occupy a position of importance. Pinnock's playing feels more reflective and relaxed than it has sometimes seemed in earlier recitals. This is especially rewarding in his limpid account of Bach's E major French Suite. He has always had an infectious way with dance rhythms and in this Suite with its profusion of galanteries his playing is at its most alluring. The Scarlatti sonatas, too, come over well, especially where a bravura element is present. Pinnock responds with spontaneity while at the same time communicating a sense of colour and of pageant. In the music of these composers, and indeed throughout, his performance is enhanced by the sympathetically recorded sound of a mid-18th century instrument after Hemsch, which has been Pinnock's constant companion over the past 30 years and more. While it is ideally suited to the pieces by Bach, Handel and Scarlatti, the earlier music is effectively enlivened both by restrained registration and by Pinnock's own sensibility. I can recommend this birthday disc with wholehearted enthusiasm. 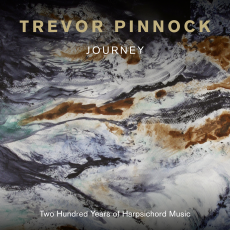