This is one of those weird coincidences that occasionally strike professional critics. I had not asked for this recording on the Linn label, but rather for another disc (Berlioz's L'Enfance du Christ) but somehow received this one instead. My editor instructed me to review it only if positive. Since I had remembered having a good impression of Martin Pearlman's Boston Baroque in the past, I thought I had a good chance of enjoying the performance, even though (to be perfectly honest) I had never heard this specific Haydn work before. So I put the CD on.

This performance is so good that it instantly peels back the dust and crud that may have surrounded this work and immediately places it on the high end of Haydn's output. Originally titled Mass in a Time of Anxiety – a title that in many ways suits this work better, since it is uplifting and cheerful – it somehow became associated with British Admiral Horatio Nelson. The music skims and sings its merry way through one's mind while listening; despite its liturgical text, the upbeat feel of the music and its wonderfully changing harmonies and moods make it sound more like a secular oratorio. And what a wonderful quartet of singers Pearlman has assembled here! It starts with soprano Mary Wilson, whose beautiful and flexible voice leaps and skips through the Kyrie, and goes all the way down to rich-voiced basso Kevin Deas, who dominates the Qui tollus peccata mundi. (The booklet informs us that this miraculous singer is "most acclaimed for his signature portrayal of the title role in Porgy and Bess." *Sigh*, I'm so sick and tired of seeing this. Have a major African-American bass or baritone emerge, and heaven forbid you start hiring them in major operatic roles. Just let them keep on singing Porgy.) Mezzo Fischer and tenor Jameson are heard to their best advantage in Et incarnates est. And of course, that chorus is spot-on; and everyone has clear diction. Hallelujah!

It is when one reaches the Symphony No. 102 that you suddenly realize that Pearlman's string section is adhering like Crazy Glue to the immutable doctrine of Straight Tone, but again his performance is so effervescent and lively that one doesn't mind so much. There are too many little touches in the way he conducts this music where the orchestra dips and glides joyously for me to enumerate them, but believe me, they are there.

Stylistically, these are fairly straightforward readings. Pearlman doesn't employ the slightly asymmetrical rubato style that I generally like in Haydn, but neither does the performance sound the least bit hard driven. Everything has a wonderful flow and energy, and he never sounds as if he is pile-driving the music, yet the incessantjoie de vivre of this performance is bubbly and infectious. And oh yes, the SACD sound is clear and natural. This one is clearly a winner. 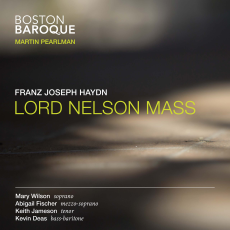