A much needed seminal recording of a work that has to have a broader audience.

Monteverdi composed-that we know of-only three operas, which is odd considering his reputation as opera composer is so sterling. Not without reason-one only needs to watch Danielle de Niese in the Glyndebourne production of L'Incoronazione di Poppea for a fabulously dramatic experience, and understand what the composer is capable of. L'Orfeo is only a little less than this standard, and even the opera under review, despite what many critics say, reaches its heights as well in my opinion.

Despite the fact that there are about sixteen media versions available, often severely cut, including those going into the 1970s by Harnoncourt, and even more importantly, Raymond Leppard (1973), there are only a few discreet performances available. To this point, Rene Jacobs must lead the charge, with the incredible rendering of Penelope by the incomparable Bernarda Fink, but Jacobs's edition, which he created, dissects the work into five acts. This does make some sense, as Jacobs always does, even though he is not above raising critical hackles.

The problem is that of all Monteverdi's operas, this one is the least definitive in terms of text. There isn't any known score in Monteverdi's hand, and a copyist's version looks "hastily and carelessly" written (notes). There is only one manuscript, though there are several libretto copies. Sometimes only a bass line is given and the upper part(s) have to be created; other times there are incomplete scenes. In other words, for a genuinely acceptable version, a lot of work has to be done in order to create something realistically reminiscent of Monteverdi's intentions, or just give in to the temptations of severe cutting and guesswork, similar to what Janet Baker performed in the much-criticized-but also highly beautiful-version by Raymond Leppard.

The original premiere of this work, in 1640, had a libretto by Giacomo Badoraro that used chapters 13-23 of Homer's Odyssey where Ulysses comes home after the Trojan War and slays all the suitors that have been besieging his wife. It's a complicated libretto, and one can see that the additional blood and gore that separated it from the earlier L'Orfeo was a motivating factor in the great response it got from those first audiences. However, since then, it has become the least performed and known of the three operas.

This is a shame, because the music is as ravishing and moving as in anything the composer ever wrote. We might never know just how great the piece is because of the aforementioned issues, but when a good version is created, in this case in the original three acts and with much thought and consideration, the results are highly provocative and rewarding. It will take some real effort for Martin Pearlman's work to be topped in future, and though I still like the magnificent perversions of Leppard and the show-stopping craziness of Jacobs, the terrific conducting, wonderful playing, and especially the smooth and radiant singing of Jennifer Rivera in the role of Penelope send this one to the top of the mountain. Great surround sound and a very warm recording top off the cake. If you love Monteverdi and don't know this opera, you really don't know Monteverdi. 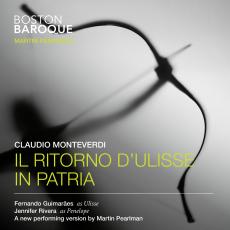