Cappella Nova - Who are these Angels? - Audiophile Audition

This well-filled album surprised me; I am a huge fan of the Scottish composer James MacMillan, and have been following his career with much interest. His connection with Capella Nova was very well established on a previous album called Tenebrae.  I was enthralled with that recording, and the wonderful sound that this ensemble brings to his music. The first of his marvelous Strathclyde Motets were given also, and completed on this new release, though please note that this is not a surround sound SACD.

What surprises me, and perhaps escaped me earlier, is the "toned-down" temperament of this music. Gone is the dissonant harmonic-laden bad boy MacMillan of earlier releases, and here we have instead a composer who not only respects the great English choral/pastoral tradition, but is even able to sound like that tradition as well! One only has to listen to the strains of "Bring us, O Lord" to be transported to the world of Parry and Stanford.

Other of the pieces are redolent of a certain type of generic post-Vatican II speak, with music that, instead of sounding original, reminds me all too much of so many pieces of mediocre anthems that have graced Catholic Church services since the early 1970s. Fortunately there are not a lot of these here, but there are some, and I had to check the booklet once or twice to make sure another composer was not stuck in there. Nope-it's MacMillan, and I guess it is no curiosity that these particular setting are to the new translations that have hit the missals in the last couple of years, improvements on the old ones no doubt-they could not have been worse-but a sort of throwback musically that makes me hope MacMillan is just backsliding a little here and has not committed to a new direction. The Mass for Blessed John Henry Newman is a good example, and is easily the least attractive piece on this disc.

But the rest, like the wonderful ending Tota pulchra es are just astounding, easy reminders that MacMillan is indeed one of the most interesting and original composers on the scene today, receiving brilliant and stylistically exuberant readings like these which only serve to further his worthy cause. Even though this is not an SACD, the stereo sound is just fine, with lots of dynamic flexibility. 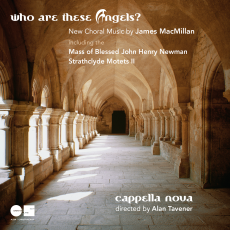