The Complete Songs of Robert Burns - The Edinburgh Guide

How can a reviewer write an adequate review of such a huge collection of the complete songs of Scotland's Bard, Robert Burns? How can justice possibly be done to the whole spectrum of Scottish traditional musicians gathered together to be heard in one comprehensive, superbly-engineered, uniquely-arranged and sensitively-mixed collection? An impossible task which has taken this reviewer far longer than usual to try to do it all justice. One approach after another just didn't work.

However, I've discovered that there are just principal four songs which have been included in different versions so I'll compare two of them: Green grow the rashes O [rashes being rushes] and Ca' the yowes tae the knowes [Call the ewes to the knolls or closer pastures from the hills]. In Linn's publication schedule Ca' the yowes tae the knowes comes first, in its second version (Disc 3 track 14). Burns' handling of both versions show him at his very best as a collector and interpreter of folksongs. They're also a potted version of the early publication history of Scotland's national songs.

For anyone who knows the Cluden Water, Ian Bruce's intimate voice will tempt anybody into this love song's magic web as the shepherd draws his young love out into the balmy late evening air of a truly magical corner of Scotland. Voice, guitar, bouzouki, fiddle, whistle and a lovely clarsach paint the picture. We hear the song thrush (the mavis), can picture the Cluden woods, the moon over the water, feel safe from the ruined Tower's possible threat and luxuriate in the shepehrd's undying love.

What a contrast the first version is! It's found on the double disc CD 11 (which carries a Parental Guidance, Explicit Content warning!) 11a track 1. This Ca' the yowes is a country-bred lovers' dialogue in which Kirsten Easdale and Ross Kennedy use the calling in of the sheep to tell their trysting tale and how her shepherd won her. She's a willing lass and he's a much more earthy, persuasive lad, difficult to resist. The music comes from different guitar and bouzouki players but this time there's a haunting flute from Eddie McGuire. The whole song tells a very different tale from Version 2. Karen's voice inserts what might be called a 'grace note' to the written music, coming over as a catch in her voice but all is made clear in the flute's own grace notes. This first version (also by Burns) had already been published in 1790 in vol.III of the series the Scots Musical Museum.

Green grow the rashes O also has its second, more bawdy version on CD 11, this time 11b Track 23. Burns' close friend John Richmond was the recipient of this version, enclosed in the proud new father's announcement letter of the birth of Jean Armour's first set of twins by him. It's sung by Wendy Weatherby taking the role of narrator telling about the hero's total change of character when in drink and meeting up with a gypsy woman. It defnitely needs the parental digit on the fast forward button. It's also short and paired with Altho' my back be at the wa' telling of the chase by a randy suitor.

Both songs are over in the time it takes for Deaf Shepeherd's lead singer John Morran accompanying himself on his octave mandolin to sing version 1 (CD8 Track 16). This was the very first of Burns' songs to be printed (in vol.I of the Scots Musical Museum in 1787) and is sung exactly as directed, with the chorus repeated after every verse - something which doesn't always happen with the other songs. Its allure is enduring, spelling out as it does Burns' love of "the lasses O" and contrasting this with the chasing of worldly fame. Morran's mandolin introduction and ending neatly accentuate his swelling delight in Nature's noblest work in creating "the lasses O".

This set remains, above all, a unique recorded resource which reveals just how much of a giant of song and poetry Scotland's National Bard Burns was. His humanitarian and egalitarian principles shine through. The recorded examples all come from the cream of Scottish traditional music, with many tracks being recorded by the best of our recording companies and the arrangements mostly being done by the musicians themselves. So, it's not only Burns to be celebrated but also every single person involved in this must-have Burns collection. It's also a fine example of Scottish traditional music and musicians' integrity and clarity and will be a primary source for future ethnomusicologists. 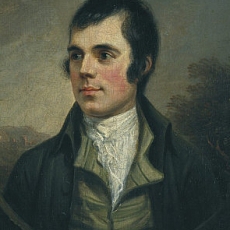