'Art is long, life is short.' The history of the theorbo, the long-necked bass member of the lute family, is indeed short, spanning the period of the transition from the Renaissance to the Baroque. But the art of music for the instrument has survived centuries up to the present day, thanks to the dedication of performers such as Elizabeth Kenny, and to her enterprise in working with composers to bring new theorbo works into being.

Old and new are deftly interwoven. Pieces from Alessandro Piccinini's 1623 collection, exploratory toccatas and fluent sets of variations, are wrapped around a Motet from James MacMillan's Passion cantata Since it was the day of Preparation..., an assembly of simple, meaningful gestures. Three pieces from Giovanni Girolamo Kapsperger's Fourth Book of 1640, including a virtuoso Toccata, precede Benjamin Oliver's Extending from the inside, and expanding set of variations which at one point breaks into percussive jazzy chords. And the shadowed eloquence of Robert de Visée's Suite in C minor proves an ideal introduction to Nico Muhly's Berceuse with seven variations which ingeniously combines suite form and variation technique.

Kenny's performances are superb, technically assured in the trickiest variations, and always with a sense of spontaneous re-creation which matches the improvisatory nature of the 17th-century toccatas and the wilder flights of invention of the 21st-century pieces. The recording provides an intimate focus on the performer, yet with enough ambience to suggest a space gratefully shared by the listener. 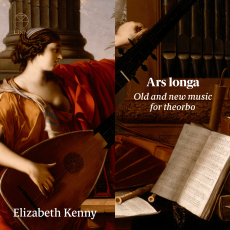