Soon after his arrival in Italy George Frideric Handel started to compose in the genres of vocal music which were most popular at the time: opera, chamber cantata and oratorio. He continued to do so after his departure from Italy. Chamber cantatas were very close to opera as far as their subject matter was concerned, but they were intended for performance in intimate surroundings, especially the gatherings of the academies in Rome and other towns. The cantata Apollo e Dafne is a specimen of a category which is a mixture of chamber cantata and opera: it is scored for only two voices, but these represent different characters and are accompanied by an orchestra rather than a small ensemble of one or two melody instruments and bc, or even basso continuo alone.

Handel probably started composing the cantata in Venice in 1709, but completed it in Hanover in 1710, when he took up his job as Kapellmeister to the Elector. The first performance seems to have taken place in February 1711 in London, at the occasion of the birthday of Queen Anne. She was enthusiastic about Handel’s cantata, and so was the court chronicler who described it as "a fine consort, being a Dialogue in Italian, in Her Majesty’s Praise, set to excellent Musick by the famous Mr. Hendel".

The soloists represent Dafne (soprano) and Apollo (bass) respectively; the orchestra comprises transverse flute, two oboes, bassoon, strings and basso continuo. The work consists the usual sequence of recitatives and arias, and a couple of duets. In his operas Handel proves to be a master of the musical depiction of characters, and this cantata is an early example of his skills in this department. Right from the start Apollo shows his true colours by boasting about his power which even Cupid can’t surpass. That is a mistake as he falls in love with Dafne the moment he sees her. She resists his advances, but when he starts to stalk her she escapes by turning herself into a laurel tree. In the closing aria Apollo resigns himself to his fate: "Dear laurel, with my tears I shall water your green leaves".

Because this cantata is so close to opera it requires a dramatic interpretation. In that respect this recording does not disappoint. The interaction between Mhairi Lawson and Callum Thorpe is excellent, in the cantata as a whole, and in particular in the recitative which precedes the duet ’Deh! lascia addolcire’. In this duet the contrast between the two characters is worked out very well by the two singers. The turn from aria into recitative towards the end, preceding the closing aria, is another example of this performance’s dramatic character.

The recitatives are taken with exactly the right amount of rhythmic freedom—often a weakness in recordings of this kind of repertoire. Callum Thorpe makes a very good impression: he has a beautiful voice which is perfectly suited to baroque cantata and opera. He pays much attention to the text and there is an appropriate differentiation between good and bad notes. There are some deep notes in his part; fortunately his low register is quite strong. Mhairi Lawson is convincing in her performance of the part of Dafne: both the naiveté at the start and her firmness in the later stages are conveyed well. Based on past experiences I feared that she would use quite some vibrato. She certainly is not free from it and I would have liked a little less, but she keeps it in check and it didn’t bother me that much. The aria ’Come in ciel’ is one of the highlights of this performance.

There is no lack of recordings of this cantata; I don’t know all of them, but this one is one of the best I have heard. In addition to what I have said about it I should mention that the ornamentation is stylish and never exaggerated. That not only goes for the singers, but also for Katharina Spreckelsen whose oboe plays a particularly important role in this piece.

The Ensemble Marsyas is a fine ensemble. It not only demonstrates its qualities in Apollo e Dafne, but also in the Overture to the opera Il pastor fido. It is followed by two Arias in F which are two of various pieces for wind ensemble in Handel’s oeuvre. These are little known and therefore their inclusion here is to be welcomed. The second of the two is used as a kind of overture to the cantata which comes without one: the opening recitative follows the aria attacca.

If you look for a recording of Apollo e Dafne you can hardly go wrong with this performance. In addition you get some fine instrumental music as well. Handel aficionados certainly won’t hesitate to add this disc to their collection. 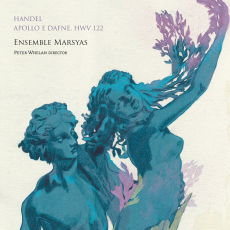