Telemann is a very popular composer among chamber music ensembles these days. New recordings with solo sonatas, trios and quartets appear with an almost clock-like regularity. I have no problems with that - on the contrary. Telemann is an exciting composer who never stops to impress with his inexhaustible creativity. His chamber music oeuvre is large, and there are certainly pieces which have never been recorded. I don't think any piece on this disc is new to the catalogue, although some compositions are not that well-known. Normally that would be one of my points of criticism, but not in this case. Over the years I have heard many discs with music by Telemann, but they were not always enjoyable. Telemann's music needs really good performances which bring out all the particularities of his style of composition. This disc by the Ensemble Meridian is one of the best I have heard lately.

One of the features of Telemann's music is the mixture of various national styles, as is often observed and is also described by Dominique Tinguely in her liner-notes. But he was able to mix them in such a way that one never gets the impression of his compositions being an amalgam of styles put together at will. It is very much Telemann - his music is not easy to confuse with that by other composers. Another feature is the fact that his writing for the various instruments is highly idiomatic. This can be explained from his own command of a whole range of instruments. There were very few instruments in vogue in his time which he did not play.

Telemann was the most fashionable and most admired composer of his time. He sold his own compositions, and they sold very
well, not only in Germany but across Europe. He was never considered old-fashioned, because he was able to adapt to the latest trends in music. He could write in contrapuntal style with the same ease as in the galant idiom. In many cases he even mixes them, and that is one of the reasons his output is so captivating, not only for performers to play but also for music lovers to listen to.

The present disc offers a nice survey of the various forms of chamber music Telemann made use of. The trio sonata was one of the most popular forms of chamber music of the first half of the 18th century - a genre for which Corelli had laid the foundation. Telemann was considered a master of this genre and his trios were used as models in pedagogical works. The Sonata in e minor (TWV 42,e11) is one of the most French pieces on this disc, with two parts for dessus which is usually played on violins. Here it is performed with recorder and violin, which works quite well. The second movement, viste gay, is especially nice, with strong dynamic accents. Notable are the frequent staccato passages in the grave.

The collection Essercizii Musici is one of the most important in Telemann's oeuvre, with pieces in less common scorings, including a concertante harpsichord. Here two trios from this collection are performed. The combination of recorder and viola da gamba in the Sonata in F (TWV 42,F3) is rather unusual, but less so in Telemann's oeuvre. He apparently liked this contrast between two very different instruments and used it regularly. The first movement contains strong contrasts which are fully explored, and the middle movement, mesto, is dominated by counterpoint. To the same category belongs the Sonata in b minor (TWV 42,h6), one of the least-known items on the programme, and the only one of which I couldn't find a recording in my collection. It is a shame that only one of the four movements has been recorded. It isn't mentioned in the booklet, so I can't tell why it wasn't recorded complete. This largo is given a very beautiful performance by Sabine Stoffer and Tore Eketorp.

A Telemann specialty was the quartet. He wrote quite a number of them; the most famous are the 'Paris' quartets and the quartets in the Musique de table. The programme starts with the Quartet in G (TWV 43,G6) - here called Concerto - which is in three movements. In the first the violin has a notably vivid part, whereas in the last movement it is the oboe who has a leading role to play. The titles of Telemann's chamber music is often a little confusing as (trio) sonatas are sometimes referred to as trios and quartets as quatuors or concertos. The latter is probably inspired by the character of some quartets with solo and tutti passages. An example is the Quartet in a minor (TWV 43,a3) which in the liner-notes is presented as a specimen of the Sonata auf Concertenart: "a hybrid between the sonata and the Italian concerto".

The disc ends with a piece which was attributed to Telemann, but according to the liner-notes is now assumed to have been written by his colleague Pierre Prowo, the Sonata in d minor (TWV 42,d10). According to my information this attribution only regards the basso continuo part, whereas the two treble parts are still thought to be from Telemann's pen. It is an exciting piece, well suited as a showstopper at the end of a concert, with a presto in Polish style as its last movement. Here the ensemble give all they have got.

It is a worthy ending of an outstanding disc which I have heard with great pleasure. The five players are all very good and they play with fire and passion. These performances are what one could call 'gestural', with much attention to detail and showing a thorough understanding of the rhetorical character of baroque music. This is how Telemann's chamber music should be played. I certainly hope to hear more from the Ensemble Meridian in the near future. 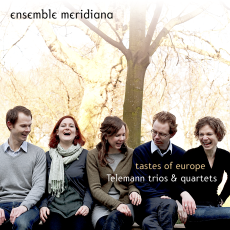 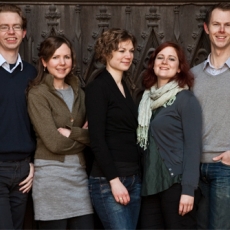