When the interest of English audiences in Italian opera began to wane Handel reacted by turning his attention to English oratorio. In 1732 he performed Esther which was the start of a long series of oratorios which he would continue to compose until the end of his life. However, Esther was not a new work: it was the reworking of a piece which he had composed as early as 1720 for James Brydges, Earle of Carnarvon and later Duke of Chandos. He acted as Handel's patron and between mid-1717 and 1718 Handel was the composer-in-residence at Cannons, the Duke's mansion near Edgware. This resulted in various compositions, such as the so-called Chandos Anthems, the Chandos Te Deum and the masque Acis and Galatea.

Research has shown that even an earlier version existed which Handel started to compose in 1718. It is impossible to say whether that was any more than a draft. In his liner-notes John Butt remarks that much of it was "clearly discarded during the revision". He adds that in both cases the scoring reflected the vocal and instrumental forces which he had at his disposal at Cannons.

Esther is available in various recordings, and that includes some attempts to perform the version of 1720. "This recording presents the earliest recoverable performing version of Handel's Esther, responding to recent findings and hypotheses about the origins of the work". Previous recordings of the first version have followed the division into six scenes in the autograph. Handel scholar John H. Roberts, upon whose research this version is largely based, suggests that for the performance at Cannons this was replaced by a division into three acts. In this performance each act comprises three scenes. A clear difference with previous recordings is the fact that the aria 'Sing songs of praise' is omitted. It is assumed that the recitative 'O God, who from the suckling's mouth' which is usually sung after the aria 'Praise the Lord', was meant to introduce that aria, and replace the aria 'Sing songs of praise'. Another notable difference is that this aria is allocated here to the 'Israelite Boy' rather than the 'Israelite Woman'.

Esther is different from many of Handel's oratorios in that it is not all that dramatic. It is not a flow of events presented in a theatrical fashion, but rather a sequence of tableaux. If you don't know the story it is hard to understand its logic. Obviously the original audiences knew the biblical story of Esther, Mordecai, Haman and Assuerus very well. The most dramatic part is the second scene of the third act when Esther reveals to Assuerus Haman's plans to kill her people. Handel's oratorios also often include a love scene. Here it is in the second scene of the second act when Assuerus expresses his feelings for Esther.

Acts one and two show a kind of restraint and intimacy which could probably be explained by the origin of a large part of the music in the second act. Here Handel makes extensive use of music he had written only a couple of years before in his Brockes Passion. No less than nine numbers are based on this work. This intimacy is only enhanced by the line-up of the ensemble: the choruses are sung with two voices per part, the instrumental ensemble is also relatively small, with six violins, two violas, cello and double bass, plus the usual wind instruments. It is only in the third act that the trumpet and the horns manifest themselves.

The Dunedin Consort delivers a performance which is outstanding throughout. The restraint of the first two acts and the excitement of the third come off equally well. The casting is spot-on. I have to admit that I have never really liked James Gilchrist's singing. That is partly a matter of personal taste, but I also regret the incessant vibrato which is rather narrow but which is stylistically dubious. That said, he gives an admirable account of the role of Assuerus, with a particularly impressive performance of the long aria 'O beauteous Queen' in the second act. Susan Hamilton convincingly shows the two sides of Esther: hesitation and fear in the second act and her anger towards Haman in the third. Robin Blaze is probably a bit too weak in act one, especially in the recitative 'How have our sins provok'd the Lord', which could have been more powerful. However, there is no weakness at all in the incisive aria 'Jehova crown'd with glory bright' which opens the last act.

Electra Lochhead's contribution is remarkable. At the time of this recording she was probably in her late teens as she was head chorister at St Mary's Episcopal Cathedral in Edinburgh until September 2009. She delivers a very good performance of the aria 'Praise the Lord with cheerful noise'. John Butt states that this role was probably originally sung by a boy, and that is perhaps used as an argument for this performance with a girl. However, he later writes that it is quite possible that the whole performance in 1720 took place with trebles and no female singers at all. From that angle there is no reason not to use an adult soprano here. Thomas Hobbs sings the role of the First Israelite; his aria 'Tune your harps' in the first act, with an obbligato part for oboe and the strings playing pizzicato, is delightful. The role of Mordecai is sung by Nicholas Mulroy; his assurance as expressed in the aria 'Dread not, righteous Queen, the danger' in the second act comes across convincingly. Lastly, Matthew Brook plays the villain of the piece, Haman. In the first act he perfectly portrays his boasting: "Pluck root and branch from out the land: Shall I the God of Israel fear?" In the third act he has to acknowledge that indeed he should. Brook shows his softer side when he asks Esther for mercy: "Turn not, O Queen, thy face away". Very well done.

The choruses are impressive as far as their dramatic power is concerned. The closing chorus which last almost twelve minutes, is quite exciting. In regard to blending there is something to be desired, especally due to the vibrato in some of the voices.

True Handelians won't hesitate. They probably have already added this recording to their collection. Others should consider it too, even if they have this oratorio in the version of 1732. It is not only historically interesting, it is also musically highly rewarding. 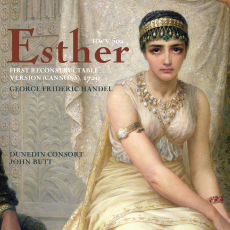