The Palladians (violinist Rodolfo Richter, gambist Susanne Heinrich, harpsichordist Silas Standage, and William Carter, who variously plays archlute and guitar and annotates the booklet) have spiced their program of works by Giuseppe Tartini with a Violin Sonata by his early rival, Francesco Maria Veracini—all in becoming period costume. The program opens with Tartini’s signature “Devil’s Trill,” this time hewing close to the original published for the first time by Jean-Baptiste Cartier in his mammoth collection L’Art du violon from the last years of the 1700s. Those who grew up with Kreisler’s version may be surprised to find in this earlier snapshot of the work not only greater expressivity (which doesn’t depend only on the resourcefulness of the violinist but upon the colors realized by the continuo-players as well—even in passages like the finale’s simpler Andante) but also greater freedom (as when they play with the tempo rhetorically in the early measures of the second movement or in the opening of the finale’s Allegro assai). Since Tartini seemed to be moving, in his later works, away from white-knuckled dependence on the accompaniment (Andrew Manze played the work unaccompanied, except by himself in his imaginative encrustations of double-stopped ornaments), the question might arise whether so heavy a continuo part seems altogether appropriate (look at the almost primordial simplicity of the original figured bass). But that’s an academic quibble, because the Palladians made a very energetic case for their luxuriant realization. Rodolfo Richter combines virtuosity with hair-raising sensationalism, especially in the finale, during which he makes the devil’s own trill sound as though it might have been conceived by its namesake. The reverberant recorded sound (I listened on a CD, rather than an SACD, player) sometimes allows the booming continuo almost to swallow the upper part. But it’s audible enough to reveal the magic of Richter’s fancy. For those not tied to Grumiaux, Oistrakh, or Milstein, the Elegant One, the Passionate One, or the Noble One, respectively, Richter may provide a more inviting alternative—and a more repeatable experience—than does Manze in his more solipsistic ruminations.

The “other” G-Minor Sonata, op. 1/10, better known by its subtitle, “Didone abbandonata,” offers the listener, if not the violinist, about as much pleasure. Violinists may have played it more as a routine violin sonata than as a tone poem expressing, as did another of the period’s composers, Dido’s lament. Richter and the ensemble have pared away the anomalous additional movement, in B? Major—from another work, I believe—that occupied the third position in modern recordings. I’d always felt that the work made more sense without it. If any case might be made for Tartini as a poet who excoriated Vivaldi’s more instrumental manner of expression, this performance could be offered as an exhibit. That’s not to say that the second movement isn’t dashing—it exudes an energy that few modern performances have matched. But the “finale” indulges sensibilities more touching than modern, faster performances could accommodate.

Tartini retired for study, so one story goes, after hearing Veracini play in what would otherwise have been a contest, and it’s easy to see why. Arthur Grumiaux played this very Sonata in a style that could have opened windows to sunlight in the duskiest of Italian cathedrals. Supported by a more developed continuo part, Richter’s performance nevertheless admits almost as much light, and his 1674 Andrea Guarneri hardly suffers by comparison. Here’s the Sonata that, more than any other work, awakened my lifelong interest in the Baroque, recreated and even reinvented in a performance that reignites my original enthusiasm (and includes a finale even more breathtaking than Grumiaux’s). Lyriarte (Rüdiger Lotter and Olga Watts) included the Sonata in their collection of sonatas by Geminiani and Veracini (Oehms 356, 29:1); their performance may seem fleeter and lighter in weight partly because of Linn’s more reverberant bass.

The Largo of Tartini’s Sonata in E Minor, op. 1/5, demonstrates how expressive and interesting Tartini’s melody could still sound (though he sometimes recycled melodic figures), especially in an intimate performance like this one, accompanied only by gamba. The “Pastorale” Sonata, op. 1/13, employs scordatura, instructing the violinist to tune the lower two strings up a whole step, creating possibilities, of which the ensemble takes maximum advantage in the rustic Allegro and the tambourin-like finale, for sonorities based on the new tuning, A-e-a´-e´. Those who look for color should find that the Palladians’ performance captures even more of the rustic flavor of the second movement than does that of the reliably colorful Andrew Manze (Harmonia Mundi 907213, 21:5). The program closes with a performance of the Grave from Tartini’s Gamba Concerto in D Minor.

Two of the most striking violinist-composers of the Baroque era—or any other era, for that matter—appear in performances on period instruments that nobody, of whatever predilections, can afford not to acquire. It is music from the land before the time of competitions—but wait: it really isn’t! Anyway, the highest and most urgent recommendation. 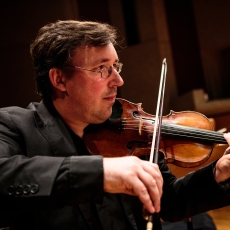