Pamela Thorby enjoys a distinguished career. As a soloist and member of the Palladian Ensemble she has toured and recorded extensively. Her biography in the booklet notes with this disc makes the surprising, but justifiable, claim that she is 'the most listened-to recorder player in the world'. In this latest disc for Linn Records she performs what may be regarded as 'core' repertoire for the recorder: Handel's sonatas.

Taking their cue from the rubric on Handel's manuscript fair copy of these works - which states that the sonatas are for 'flauto e cembalo' - Thorby and her 'accompanist' Richard Egarr eschew an additional melodic bass instrument. They infer that the works are 'true duets' and that Handel's designation is instrument-specific. (It should be observed, however, that their interpretation of 'cembalo' is loose enough to encompass accompaniment on the organ in the Sonatas in B flat, F and G minor.) Whether or not Handel had specific intentions in this regard, the balance between the instruments is largely successful in this recording. Only on occasions could one wish for more definition and clarity in the bass part to enhance the musical dialogue. The semiquaver runs in the Andante of the G minor Sonata, for example, are somewhat indistinct; but on the other hand, those in the Furioso of the D minor work benefit from the precision of the harpsichord voicing, not to mention the agility of Egarr's left hand. In this movement, as throughout the disc, the performers display an admirable technical control.

Even so, chief among the attributes of her playing on this disc is Thorby's approach to ornamentation. Her guiding principle is 'to enhance the musical language' while leaving an 'individual imprint' on Handel's original. Both performers this latter with ease. Thorby makes some arresting gestures with her variations on Handel's text, while Egarr indulges in some particularly florid harpsichord continuo realizations. The one aspect of the playing which disappoints is Thorby's use of diaphragm-driven swelling and vibrato, used - presumably - to compensate for the instrument's limited dynamic range. While this is a technique employed by a number of recorder specialists, it always sounds to me rather mannered and, frankly, contrary to the nature of the instrument, since the swelling inevitably stretches the intonation. Others may like it but, for me, a more musically satisfying and discreet device is flattement.

That said, these works are here given distinctive and individual readings. if you like your Handel sonatas plain and simple, this is not for you; but if you want a more flamboyant interpretation, listen to this disc. 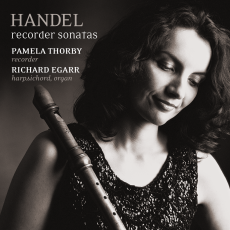