The first thing to say is that this well-recorded CD offers a feast for the ears in a purposeful anthology of Renaissance/Early Baroque music (much of it relatively little known) played with abundant character and vivacity by Il Giardino Armonico, directed by flautista straordinaria, Giovanni Antonini. The disc comes tucked inside the front cover of a beautifully produced book of almost a hundred pages. The book contains a long and wide-ranging essay by Antonini, a cento of quotations from authors of the sixteenth/seventeenth century and the modern era, alongside a splendid collection of well-reproduced paintings (and details from paintings). The aural feast is thus complemented by a related feast for the eyes. Taken together, disc and book, are richly stimulating, so that the mind gets its ‘feast’ too!

Antonini’s project is to draw attention to the importance of the irrational, the strange and bizarre, in the culture of the sixteenth and seventeenth centuries - it is something of a surprise that no reference is made to the mannerist gardens of Bomarzo in Lazio, about which that master of the irrational Salvadore Dali made a film) – more particularly in its music and its visual arts, as well as in the work of some of the most distinguished thinkers of those centuries. Two of the many quotations astutely chosen by (I presume) Giovanni Antonini offer us a way into things. One – which refers indirectly to the title of the whole project (which is derived from track 2), is taken from one of Petrarch’s love poems (Canzoniere, 211):

The second comes from the great (and now somewhat neglected) book, Moriæ encomium (The Praise of Folly) by the Dutch theologian and philosopher Desiderius Erasmus (1466-1536):

“… there are two sorts of madness, the one that which the revengeful Furies send privily from Hell, as often they let loose their snakes and put into men’s breasts the desire of war or an insatiate thirst after gold … the other, but nothing like this, that which comes from me [Folly] and is of all other things most desirable; which happens as often as some pleasing dotage not only clears the mind of its troublesome cares but renders it more jocund.” (Translated by John Wilson, 1668).

Time and again, Antonini distinguishes the composers whose music he has included on this album, in terms which suggest that they were unusual or which relate to or another kind of irrationality. Thus he says of Agricola that he was a “composer with a highly personal style” who “was regarded as ‘bizarre’ in his lifetime”; he describes Dario Castello as “a mysterious, experimental musician who wrote two books of highly original compositions. His Sonata XIV seems almost like a miniature instrumental ‘dramma per musica’, alternating between sections of contrasting character before culminating in a visionary finale that almost has one thinking of rock music.” Of Gesualdo’s Canzon Francese del Principe he writes that it is a “very original piece, ‘bipolar’ in character, [which] alternates serene moments with sudden explosions of affects, featuring extremely rapid runs and strange semitone trills, entirely in accordance with the bizarre nature and perhaps unstable character of the composer.”

Turning to what we hear, rather than what we read: the opening track is a prelude for flute. Since neither a composer name nor the word ‘Anonymous’ appears against this piece in the booklet track list, I assume that it is either a composition – or perhaps an improvisation – by Antonini. (My guess would be that it is an improvisation). After the relatively spare sound of the unaccompanied flute, most of the remaining tracks are richly coloured – the instruments played by the 14 members of Il Giardino Armonico include a range of flutes (is there a collective noun for flutes? Perhaps ‘a flourish’?), dulcians, several different cornetti, trombones/sackbuts, violins, cello, violone, vielle, Renaissance and Baroque harps, harpsichord and organ. There are over 30 different instruments listed, so variety of colours is not lacking. I love, for example, the instrumental textures which vivify Tye’s In Nomine Crye or capture to perfection the beauty and pathos of Desprez’s Nymphes des bois a musical memorial erected to mark the death of Johannes Ockeghem. Other delights include Margaret Koll’s contribution (at the harp) on Gesualdo’s Canzon Francese del Principe, the ornamentation by the winds on Samuel Scheidt’s Galliard Battaglia and the tremendous work of the cornettists Andrea Inghisciano and Gawain Glenron, especially on Gombert’s beautiful chanson La Rose. This list might easily be extended but doing so would run the risk of naming almost every track.

One might also approach this disc as a carnivalesque anthology, or as a study in the production and interpretation of instrumental versions of vocal music. For the most part Antonini and Il Giardino Armonico treat the letter of this music with respect, and certainly capture its spirit. They do, however, allow themselves one or two moments of deliberate anachronism. In one case – that of Giovan Pietra Del Buono’s Sonata VII Stravagante sull’Ave Maris Stella, the liberty taken brings its reward. Antonini’s essay describes the decision and its effect very well: he observes that the piece, which he describes as “stupefying and unsettling”, is “lacking in any tonal centre of gravity. Written on the cantus firmus of the plainchant Ave Maris Stella, it is played here on a bass chalumeau – [an] instrument thought to have appeared only several decades after the publication of Del Bueno’s collection in Palermo, which makes the piece seem almost closer to the Second Viennese school of the early twentieth century than to the seventeenth”. I certainly enjoyed the result of this conscious anachronism. Less so the other striking example, which comes in the performance of Thomas Preston’s Upon la mi re, which ends with an added improvisation which Antonini describes as “stylistically free in character”. That description seems rather an understatement when one hears cornett and recorder improvising like players at the milder end of the free jazz spectrum.

One other small quibble – track 13, La Battaglia (pavan) is said to be an anonymous work from sixteenth century Italy, but this is surely the work normally attributed to the Flemish composer and music publisher Tielman Susato (c.1510 – post 1560) and printed in his collection Alderhande Danserye (Antwerp,1551)?

A comprehensive review of this remarkable collection would, I fear, become inordinately long. It would involve a full discussion of the ‘argument’ underlying this project, with its (many) areas of strength and its (few) of relative weakness, plus discussion of the chosen illustrations (and their relevance, or otherwise, to the music) as well as the implications of some of the many quotations deployed in the booklet. However, I have, I hope, said enough to make it clear that everyone with a serious interest in the music of the sixteenth and seventeenth centuries should engage with this disc and book.

This is a collection both adventurous and scholarly, a brilliant demonstration (played with great panache) that what Theseus said of the poet in the speech which opens Act V of A Midummer Night’s Dream is also true of many a composer of the sixteenth and seventeenth centuries:

“The lunatic, the lover, and the poet
Are of imagination all compact.”

La Morte della Ragione is a celebration of the powers of imagination and emotion as, well-used, superior to those of “cool reason” (to borrow another phrase from the same speech), but necessarily flirting with madness. 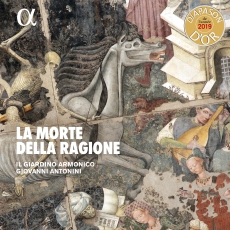