By refusing to ally himself to the received wisdom that Bach always sounds best on an ocean-going modern grand piano, John Butt gives us a Well-Tempered Clavier performed on harpsichord and instantly we're teleported back to an ancient, shady world of tuning that feels as alien to our modern experience as water divining, those harmonic ripples causing the basics of familiar musical gesture to flow in ways which are utterly unexpected, but that also feel instinctively right as Bach swims in appropriate waters again.

When performed on the sort of grand piano that does Brahms or Rachmaninov favours, the Well-Tempered. Clavier becomes frozen in time, like an adjunct to Classicism or Romanticism, more a hook for our convenience as it turns out because that is the historical prism through which we're most comfortable hearing anything vaguely 'Classical'. Bach, though, had precisely nothing to do with that Classical milieu, and Butt, playing on a facsimile of a harpsichord built during the first decade of the 1700s, plugs us back into the archaic world into which this music was actually born.

Which is a bracingly radical, forward-thinking stance for a Bach interpreter to take. Even something as glaringly familiar as the Prelude No 1 in C, as layers of 19th-century expressive varnish are stripped away, can become bracingly new, a construct as ripe for discovery as a composition by Xenakis. At three hours thirty, this is a long listen - but good! Buy this set, imbibe carefully, and you'll hear Bach's music evolve in its own internal time. Butt's informed take on the past a future in itself.

Those triadic patterns we know so well are, to pull an analogy from film, lit differently. Move away from the homogenisation of modern-day equal tempered tuning and the vibrations between notes opens up. This can, admittedly, be a shock.

The expected ribbons of seamless arpeggios mutate into a pathway less certain and texturally bumpier. Chromatic notes grind against the underlying tonality. Musical material is placed in tension with the instrument; the bouldering, sped-up semi-quaver muscularity of the C Minor Prelude (Book 1) leaves the harpsichord wheezing; in Book 2, the flâneur chromatic inclines of the D Minor Fugue sound deliciously gamey and deviant - enough to make you sigh with painful pleasure. 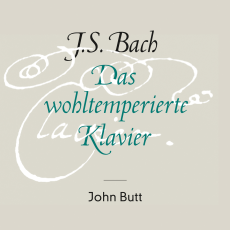