Bach's St John Passion gains more from the small-ensemble approach, I think, than its big sister, the St Matthew. Its emotional intimacy and urgency are better suited to the agility and immediacy a one-to-a-part performance brings, and the result can be a deeply compelling human drama. We have had several decent ‘chamber' St Johns in recent years - including recordings from the Ricercar Consort (7/11), Cantus Cölln and Portland Baroque (both 3/12) - but this new one from John Butt and the Dunedin Consort really struck home for me by achieving its vital results without extravagant overstatement, overt ‘holiness' or self-conscious marking-out of the work's architecture. Indeed, naturalness and emotional honesty are what emerge from this tight-knit and perfectly paced ensemble Passion, in which Bach's complex succession of recitatives, arias, choruses and chorales has surely seldom sounded so convincingly of a piece.

This is not, by the way, a polite way of saying that the performance lacks expressive variety or that performing standards are modest. On the contrary, the increasingly impressive Nicholas Mulroy's alert, lightly coloured Evangelist strikes a balance in which declamation and lyricism are equally ardent and equally touching, while Matthew Brook is a supple and authoritative Christus. The use of harpsichord and organ together in the recitatives gives their joint story-telling a reassuringly grounded quality; there is nothing ‘ethereal' in this St John and it is better for it. Both singers also perform with great effectiveness in the arias, where they are joined by Joanne Lunn (her ‘Ich folge dir gleichfalls' is a joyous and sure-footed gem) and Clare Wilkinson, whose distinctive alto, straightforward in expression and tellingly connected to her speaking voice, lends fragility to ‘Von den Stricken'. Her desolate, almost whispered ‘Die Trauernacht' in ‘Es ist vollbracht!' also stabs to the heart.

When these four sing together in the choruses, to be joined by four more ‘ripieno' singers, their sound is pressing and urgent but never hectoring, so that whether representing a crowd baying for blood or a group of chastened or horror-struck sinners, they come across as a gathering of real people rather than a disembodied chorus. The fact that you can sometimes recognise a soloist's voice within the mix only adds to this impression of reality. Chorales are shaped with care and expressive sensitivity, but also never overcooked. The Dunedin Consort's reliance on relatively young casts such as this has always brought their performances an uplifting freshness and immediacy in their recordings of Messiah, the B minor Mass and of course the St Matthew Passion, but in this harrowing piece it allows the sense of drama and personal identification to reach a higher level.

There is, however, another unique layer to this St John, for the piece is set in the context of the Good Friday Vespers liturgy of
Bach's Leipzig. This is where John Butt's scholarly curiosity pays off, for he clearly sees the liturgical setting not as a dilution but an intensification of the work's message. In this presentation the Passion - the service, not the oratorio - starts with an Easter chorale, first in Bach's organ setting (played by Butt) and then sung by a congregation (actually the University of Glasgow Chapel Choir) alternating verses with a solo Mulroy. Then a short burst from a Buxtehude Praeludium leads straight to the opening chorus, nearly nine minutes after the disc has started. A similar sequence follows Part 1, and Part 2 is prefaced by another organ chorale. Immediately after the oratorio has ended (and let's not pretend that the usual ending, a simple chorale to follow the glowing choral farewell that is ‘Ruht wohl', does not sometimes sit strangely) comes Ecce quomodo moritur, a gentle funeral motet by the Renaissance composer Jacobus Handl Gallus (sung rather well by the University Choir again under James Grossmith). The reconstruction then ends with a few liturgical nuts and bolts and a final chorale for the congregation.

None of this extra material interrupts the Passion music itself - which, for the record, is a composite version representing what
Bach's uncompleted 1739 revision might have been like - and it can be programmed out if desired. But while you may not always want to sit through nine verses of chorale before getting down to business (or indeed listen to the half-time sermon, taken from a 1720 collection by Erdmann Neumeister, which is downloadable from the Linn website!), the effect of the violin swirls, pounding lower strings and intertwining oboe suspensions of that great opening chorus interrupting Buxtehude's somewhat Gothic organ prelude certainly deserves more than one hearing. Butt makes a nice point in his booklet-note about how Bach's Passion performances would have brought together in one project local singers of all abilities, from the soloists to the ‘motet choir' to members of the congregation; and if his aim here has been to position this in the listener's imagination and suggest the element of inclusive community that any Passion performance ought to have, well, it works for me. 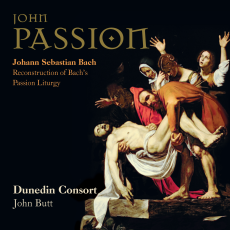