This Echo series re-issue of Linn's original 2001 release of The Song of Songs is welcome indeed as an addition to the discography of Italian composer Giovanni Pierluigi da Palestrina (1525-1594). Palestrina's marvelously expressive settings of the 29 texts receive appropriate treatment by the eight voices that comprise the a capella ensemble Magnificat. That is important because Palestrina's one-to-a-part vocal settings require a consistent evenness of approach without the extremes of mood and emotion that characterize so much of 16th century polyphony.

Also, they were dedicated to Pope Gregory XIII, who was a very energetic pontiff with a shrews legal mind who was an architect of the Counter Reformation, boldly putting into effect the recommendations of the Council of Trent, giving a boost to the founding of Jesuit colleges for the correct education of priests, reforming the calendar, patronizing the arts, and sending envoys to Japan and the Philippines. (Incidentally, he also commissioned the striking of a medal to commemorate the massacre of the Huguenots on St. Bartholomew's Day, 1572, an act that encouraged many of my own ancestors to get out of France and, ultimately, settle in the New World.)

Well, you get the idea. Gregory was a no-nonsense guy, not the sort you trifled with. Palestrina would hardly have dared to dedicate a setting of poems celebrating the joys of sexual love to this Pontiff were it not for a very long tradition of Christian exegesis going back to the second century, with Jewish antecedents a century earlier, that made the Song of Songs emblematic of Christ's love for the Church. It is not of liturgical significance, being neither a book of wisdom nor a discourse on Law or Covenant. The word "God" does not even occur.

Instead, the Song of Songs That Is Solomon's is a well-integrated series of poems in which two voices clearly emerge, male and female, inviting each other to partake of sexual intimacy, with a chorus of women ("daughters of Jerusalem") to facilitate the reader's involvement. It is couched in metaphor: leaping hinds and roebucks, a dove on the wing, a virile man "bounding over the hills," images of fruitfulness and fragrance, of lovers arising in the morning and descending into a garden, and so forth. As such, Palestrina's musical settings are chastely beautiful and flowing, never static, with few dramatic leaps. A finely balanced work that has its transcendent moments and is never monotonous despite its evenness of tone, it invites the approach it receives here from Philip Cave and Magnificat. © 2014 Audio Video Club of Atlanta 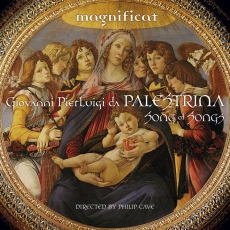