Though actually born in Colorado in 1927, composer Thomas Wilson became a proud Scot. Dubbed “the father of Scottish music”, he was a prominent academic, teacher and administrator in Glasgow, described by a colleague as “a national treasure”. I’d suggest starting with the last item on this exhilarating disc, Wilson’s Carillon, composed for his home city’s tenure as European City of Culture in 1990. Think of it as a Glaswegian take on Elgar’s Cockaigne, encompassing economic depression, architectural heritage and eventual regeneration, much of the material based around a four-note motif drawn from the city’s name. Wilson’s music is uncompromising but readily accessible, his post-tonal language confidently deployed. If Carillon’s blazing close doesn’t set your pulse racing, this disc isn’t for you. Rory Macdonald draws thrilling, punchy playing from the Royal Scottish National Orchestra.

Wilson claimed that everything he composed was symphonic, his pieces having “a broad, unhurried sweep, of unfolding grandness”. Two of his symphonies are the main works here, both compelling single-movement structures. Premiered in 1979, No. 3’s birth-to-death narrative is more cogent than that in Tippett’s contemporaneous final symphony, Wilson’s angular lyricism always gaining the upper hand. Wilson’s 4th, the "Passeleth Tapestry",celebrates the 500th anniversary of the town of Paisley, the strident bell sounds at the start making for one of the most arresting symphonic openings you’ll hear. Religious upheaval and industrialisation feature, though this phenomenally scored and structured music is strong enough to survive without a programme. Fascinating, and a startling introduction to a very individual voice. Linn’s engineering is spectacular, Wilson’s apocalyptic climaxes captured with no sense of strain. 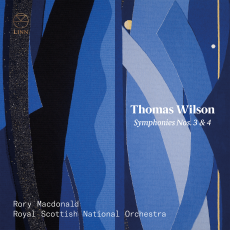