Santiago de Murcia has been in the news recently because a new manuscript of his music has come to light in Chile, together with another copy of his printed book Resumen de acompañar. An article in the May issue of Early Music by Alessandro Vera, who discovered the manuscript, sheds fresh light on Murcia's background. It seems that his patron, Jacome Andriani, had trading links with the News World, and that rather than travelling abroad himself, Murcia probably made copies of his music which were send to aficionados overseas.

A new recording of Murcia's music affords a welcome opportunity to explore his contribution to the guitar repertoire. This is a nicely-balanced programme with items from the two ‘Mexican' manuscripts, Passacalles y obras, and Codice Saldívar no. 4 and one piece (or part of a piece!) from the Resumen. Most are sets of variations, a form in which Murcia excels. The three passacalles, each in two sections, are rather sombre although they end with a flurry of scale passages or campanellas. The variations from the Saldívar Codex are more flamboyant, being based on popular dance forms, some of which are African of Mexican in origin. Murcia was fond of Corelli's music and has included arrangements of several movements from the op. 5 violin sonatas in the Passacalles. Two of these are included on the disc. He excelled as an arranger and ranged widely when choosing music to include in his various collections. The Prelude with which Carter introduces the passacalles in D minor forms one curiously chromatic episode in the lengthy Preludio to the suite in that key in Resumen. It is derived from an anonymous keyboard piece included in Martín y Coll's manuscript collection of keyboard music Flores de Música. It would have been nice to have the whole piece! The disc also includes a group of pieces from Sanz's Instrucción de música. Many of Sanz's pieces are simple and very brief, often running to no more than a few bars - the book was intended as an introduction to the guitar at a time when the idea of playing anything other than entirely strummed music may still have been a novelty in Spain. However, more accomplished players would undoubtedly have used such pieces as a basis for elaborate improvisation - which is what Carter has done with flair and originality.

It is refreshing to have most of the music played as solo music, which is surely what Murcia and Sanz intended. I heaved a sigh of relief when I realized that that was to be no percussion ad lib. Carter is to be commended for adhering quite closely to Murcia's own tablature although he can't resist the temptation to add a few flamencoesque touches here and there. He strays from the straight and narrow only by adding a bass line to some of the pieces, played pizzicato on the viola da gamba by his colleague in the Palladian Ensemble, Susanne Heinrich. Although this may not have been quite what Murcia or Sanz had in mind, because the guitar lacks a bass register, the music gains a great deal by being supported in this way especially in the Corelli arrangements and the combination of the two instruments is very attractive. The two players have a field day in Murcia's celebrated ‘Cumbees' with Heinrich keeping a steady 1-2-3 beat in the bass whilst Carter romps away with the hemiola in the guitar part, introducing some unusual dissonance and very Latin sounding rhythms of his own in the strummed passages.

The recording seemed rather over-resonant with a certain amount of fingerboard noise but otherwise this is the most attractive recording of Murcia's music to have come my way for a long time. 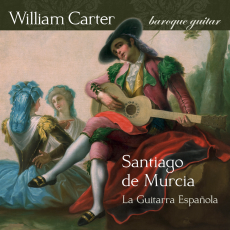