This CD could have been merely a compilation of Sibelius's incidental music were it not for Andante festivo, written not for a stage play but for a factory! Undeniably attractive, it doesn't seem particularly festive, and Joseph Swensen - who omits the optional timpani parta - does nothing to revise my opinion.

The four numbers from Belshazzar's Feast are infrequently recorded. Composers from cold countries bring out their brightest colours when painting Asia (think of Nielsen's Aladdin), and Sibelius's response to Hjalmar Procopé's forgotten drama is exotic, yet unmistakably Sibelian, particularly in the 'Nocturne', with its beautiful flute melody. Swensen is at least as good as Jukka-Pekka Saraste......

More familiar yet is The Tempest. There might have been room for the first suite too had Linn omitted the Andante Festivo or the over recorded Valse Triste. Here and in Pelleas, Swensen comes up against the estimable Sir Thomas Beecham, who nevertheless omits numbers in both. Beecham and the RPO sound richer and make a more imposing impression than Swensen and the Scottish players, although the current performance is appropriately moody.

With Pelleas, we reach well-charted territory. (The BBC's The Sky At Night never reached the United States, but those of us who have been reading booklet notes forever know that 'At the Castle Gate' is that programme's theme.) I like the menace that Swensen fiinds in this music, and also in The Tempest. 'At the Seashore', (the number Beecham omits) is quite threatening; Nature's violence anticipates the human violence lying ahead. Tuomas Ollila and Paavo Jarvi (especially) are plain beside Swensen.

Without overdoing it, the Scottish string players wash some of the colour from their tone by holding back on the vibrato. This was a good idea and it works well, so kudos to all for giving us a slightly different look at a very familiar piece. Roy McEwan's booklet notes generously put the individual numbers into the context of the larger drama. Linn's engineering is top notch. 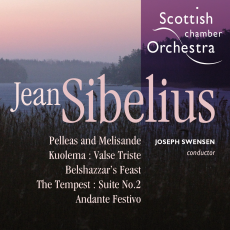