For the fifth recording that Scotland’s Linn label has issued of Trevor Pinnock working with small groups of the finest student musicians, the harpsichordist and conductor has moved back in time, following releases of music by Mahler, Bruckner and Mozart.

In truth, however, Bach’s Goldberg Variations were a very specialised taste until Canadian pianist Glenn Gould made his hit first recording of them, and this arrangement for strings and four wind players by Polish composer Jozef Koffler dates from 17 years earlier, in 1938.

Koffler, who died at the hands of the Nazis towards the end of the Second World War, is a fascinating figure, who was a respected journalist as well as an associate of Berg, Schoenberg and his countryman Karol Szymanowski. The combination of his own modernist sensibility and his clear respect for the Baroque produces a compelling score, which is beautifully realised by Pinnock and his young players.

They include, in a neat echo of the work’s performance history, six string players (of the 15) from the Glenn Gould School at Toronto’s Royal Conservatory. The photograph on the inside of the CD shows the young musicians walking near Snape Maltings in Suffolk, where the recording was made, and visually echoes the village painting on the front, by Chara Kowalska, a Polish contemporary of Koffler, who also died after being arrested by the Gestapo.

That attention to detail in the packaging is only appropriate for what is a revelatory recording of the familiar keyboard work. It is almost impossible to imagine seasoned professionals performing it better. 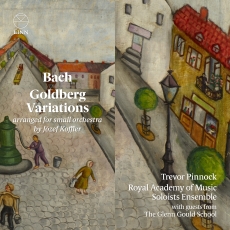