On this new disc from Linn Records, flautist Katherine Bryan plays music for solo flute and orchestra by RVW, Saint-Saens, Shostakovich, Frantisek Drdla, Massenet, Kreisler and Sarasate with the Royal Scottish National Orchestra conducted by Jac van Steen, along with music for solo flute by Paganini. The catch, of course, is that with the exception of one piece on the disc all the music was actually written for violin and Bryan has arranged the solo part for flute with, in some cases, Chris Hazell adjusting the orchestration.

I have to confess that when I saw the CD my heart rather sank. Another disc of transcriptions for flute, with an attractive female flautist on the cover whose pictures ticked all the boxes - sexy, stylish, witty and with significant decolletage. But when I started listening, I was won over. This is no disc of pot-pourri selections but a group of striking violin show pieces which Bryan shows can work for flute.

Of course, you cannot just play violin parts on the flute, though the two have a great deal in common in terms of tessitura, the flute's sound changes significantly over its range so that in some places Bryan has had to transpose music down to get the right softness and in others transpose it up to get the right degree of brilliance. Also, Chris Hazell has adjusted the orchestration of the Shostakovich and the Sarasate, to enable the flute to be heard in places, and has orchestrated the Drdla.

Bryan is the principal flautist with the Royal Scottish National Orchestra, a position she has held since she was 21. She studied at the Juilliard School of Music in New York, and was three times a finalist in the BBC Young Musician of the Year.

She opens with RVW's The Lark Ascending. Given the propensity of the flute to sound bird-like, it is surprising that flute versions are not more common and the transcription works surprisingly well. Some of the flurries of notes suite the flute and sound very idiomatic. Of course, there is the difference in timbre to the violin so the flute contrasts with the strings rather than emerging from them and I did wonder about the changes required for the difference in tessitura. But Bryan gives a lovely fluid performance with fine even tone.

Next comes Camille Saint-Saens' Introduction et rondo capriccioso for violin and orchestra. Here, the show-off double and triple stopping caused challenges and the cadenza is entirely new. After a lovely atmospheric introduction, we get an Allegro full of fluid passagework. Whilst I was aware of the difference in tessitura making the performance lighter and higher, without the dark gypsy feel of the violin part, it was highly effective and certainly helped by the lovely musical performance from Bryan.

The Romance from Shostakovich's The Gadfly Suite is based on music Shostakovich wrote for a film. Bryan's arrangement involves playing the Romance  in a higher key so that the flute can play the lower passages. A short piece, Bryan plays with fluid beauty of tone. Frantisek Drdla (1896-1944) was a Czech violinist and composer of light music. His Serenade No. 1 for violin and piano is here played in an orchestration by Chris Hazell. It is a charming piece and Bryan makes it full of character.

Saint-Saens Romance is the one piece originally written for a flute and it does show. In my notes, listening blind, I wrote that it did not sound like a transcriptions. Here Bryan is fluent and graceful.

I have to confess that I had my doubts about Pagannini's Caprice No. 24. Technically Bryan is superb, but I do find that something is lacking in transcription, particularly the passages where the violin has to cross the string and here they are fluently played, and sound a bit too easy.

The Meditation from Massenet's Thais works well, with the flute bringing a lovely cool beauty to the violin solo and in fact Bryan had to make virtually no alterations to the solo violin part. Similarly Kreisler's Libesleid which Kreisler used to play as an encore.

We finish with Sarasate's Zigeunerwiesen written for himself to play in 1878 and a staple of show-off violinists ever since. Here we have a show-off flautist, demonstrating a superb technical control but like the Saint-Saens Introduction et rondo capriccioso (which was in fact written for Sarasate), you do miss the gypsy darkness and earthiness that the violin can bring. The whole is played a fifth higher than the violin version and whilst I appreciate the reasons why she introduces them, the pitch bends do sound a bit contrived.

The pieces on this disc will not replace the standard violin versions in my library, but overall it is a testament to Katherine Bryan's intelligence and musicianship that we can appreciate the works without finding the disc a stunt. Throughout she is finely supported by Jac van Steen and her colleagues at the Royal Scottish National Orchestra. 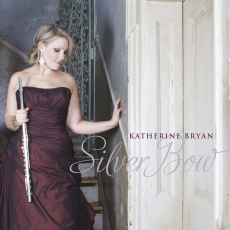 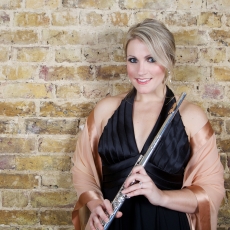