This is the third release from the Royal Academy of Music's series showcasing Schoenberg's vision of chamber-music arrangements of contemporary works made for his Society for Private Musical Performances in Vienna. It's doubly welcome because this CD focuses on the familial and musical crosscurrents and cross-fertilisations flowing a round Schoenberg himself.

His own arrangement of Mahler's Lieder eines fahrenden gesellen reveals that Schoenberg minutely understood the older composer's core sensibility; and the warm, fine-grained and lyrical baritone of Gareth Brynmor John tunes in to Schoenberg's pungent and resinous arrangement, sweet with avian flute and violin, bittersweet in the dark, mesmeric breathing of the harmonium.

Christopher Austin prefers to use the accordion for his own wonderfully imaginative and idiomatic arrangement of the six Maeterlinck settings of Schoenberg's pupil and brother-in-law, Zemlinsky. He succeeds in balancing the intimacy and the opulence of Zemlinsky's particular flavour of Expressionism, and nudges the composer's voice even further into the future in his inspired use of the vibraphone. Katie Bray's mezzo here catches Zemlinsky's dark and impassioned response to the Romantic archaism of Maeterlinck's verse.

In between comes an arrangement of an arranger-supreme. Busoni's unsettling Berceuse elegiaque, recreated in a chamber version by another Schoenberg pupil, Erwin Stein, creates recessions of instrumental mist, beautifully poised in Trevor Pinnock's direction of the excellent RAM Soloists Ensemble, and nicely captured in this warm, close, yet clear recording. 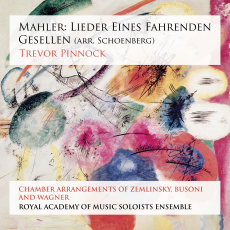