Here is the mother of all Mozart's Harmoniemusik serenades, cassations, and divertimentos, the "Gran Partita" Serenade for 13 instruments, 12 woodwinds plus double bass. The seven-movement work is scored for oboes, clarinets, basset horns, and bassoons in pairs and four horns. Extensive research into the origination of the piece has examined the autograph and determined that the manuscript paper Mozart used was specific to a type of paper seen in other Viennese wind-band works from 1781 and 1782. This has pretty much put to rest the contention that the Serenade dates to a later 1784 public concert given by Anton Stadler, the famed clarinet and basset horn virtuoso for whom Mozart composed the Clarinet Concerto and Clarinet Quintet. Further confirmation of the earlier date is traceable to the establishment of the Imperial Royal Harmonie by Emperor Joseph II in 1782.

The nickname, "Gran Partita," was not Mozart's; no one knows who dubbed it that, but the handle stuck due to the grand scale, symphonic conception, and performing forces of the piece, which calls for more instruments than any of the composer's other works for woodwinds alone, and is of a sophistication that far surpasses the lightweight "party music" associated with the Harmoniemusik genre.

To most, I imagine, the name Trevor Pinnock is virtually synonymous with the period instrument movement, so just to clarify, the Royal Academy of Music Soloists Ensemble heard on this release is a modern instruments group. On a technical level, the playing is impeccable, quite electrifying, really, for its virtuosic flair. But I have to be honest; this is probably the most superficial, glib reading of the piece I've ever heard, and certainly the fastest. I'm comparing Pinnock to Neville Marriner's 1984 performance with the woodwinds of the Academy of St. Martin in the Fields on Philips, one of my long-time favorites and standbys, and the timing differences tell the story.

It's as if Pinnock is using the piece as a vehicle for showing off the agility of the Royal Academy's next generation of orchestra and chamber players. It comes across as an impressive ad campaign for the school's training program: "Enroll now and you, too, can play like this."

Again, I want to make clear that as execution this is quite exceptional. The precision of tonguing, intonation, rhythmic articulation, dynamic control, and ensemble togetherness at such rapid speeds have to be heard to be believed. But as music-making, this highly proficient, facile performance feels like it robs score of the very thing that sets it aside from Mozart's other woodwind works; it takes the "Gran" right out of it.

Another version I'm quite fond of, besides the Marriner, is the performance by Charles Mackerras and the Orchestra of St. Luke's Chamber Orchestra on Telarc. At 51 minutes, it's even more expansive than Marriner's reading, investing Mozart's gorgeous woodwind writing with an even greater degree of richness and seriousness. There are enough other recordings of the Serenade to choose from as well, some on period instruments-Franz Brüggen and Philippe Herreweghe, for example-to satisfy all tastes.

Due to the length of Mozart's "Gran Partita" Serenade, many recordings offer no filler. In this case Pinnock, the Royal Academy of Music Soloists Ensemble, and Linn fill out their album with Haydn's seldom heard G-Major Notturno, Hob II:27. Sometime in the late 1780s, Haydn composed a series of eight such works, all of them scored for two solo lire organizatte (hurdy-gurdy-like instruments). Since not even one of them, let alone two, was readily available for a performance when Haydn visited London in 1790, he quickly rescored the G-Major work, as heard here, for flute, oboe, two horns, and strings. It's a delightful, lightweight, refreshing piece, though one that pales in comparison to the musical depth and breadth of the Mozart.

With the above-noted caveats, I'm going to accord this release a recommendation, but only for some of the most phenomenal woodwind playing you're ever likely to hear. 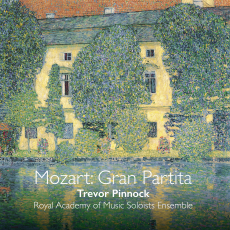